HAZEL PARK, Mich. (FOX 2) - Police have tracked down and charged two people accused of stealing a vehicle and $40,000 from a 74-year-old veteran who was giving them a job and a place to stay.

"It's just heartbreaking. You could be so good to people and they can turn around and do something like that," Terry Finken told us back in January, when the theft happened.

Two people who were accused of stealing a truck and thousands of dollars from a veteran in Hazel Park are now facing charges.

Now, Hazel Park police have tracked the two suspects down after they were caught on surveillance video. The not-so-dynamic duo has been charged and Finken's truck has been recovered.

Finken then decided to pay it forward during this pandemic with gift cards for pizza for the police department that helped him.

"They said if I wanted to buy masks and gloves and sanitizer and bring it to them it'd be alright but we couldn't find any. I thought well, everybody's gotta eat, we'll do the next best thing," he said. "They're doing a tough job out there."

The Hazel Park police department has had six members including Chief Brian Buchholz get sick with the coronavirus while also having to work on the front lines. All of them thankfully have recovered.

"Once I got through it, it seemed like a switch turned and I felt great after the symptoms were over. I just got back to work in person on Monday," Buchholz said.

"All of us are back to work now," Hazel Park mayor Michael Webb told us. "I think we need inspirational positivity in this pandemic and I think that we're very fortunate to have community people like this donate to our first responders."

"His generosity and his giving is what led him to be a victim of these crimes this past year. For him to still be generous and thank us, it's great. We love it," Buchholz said. 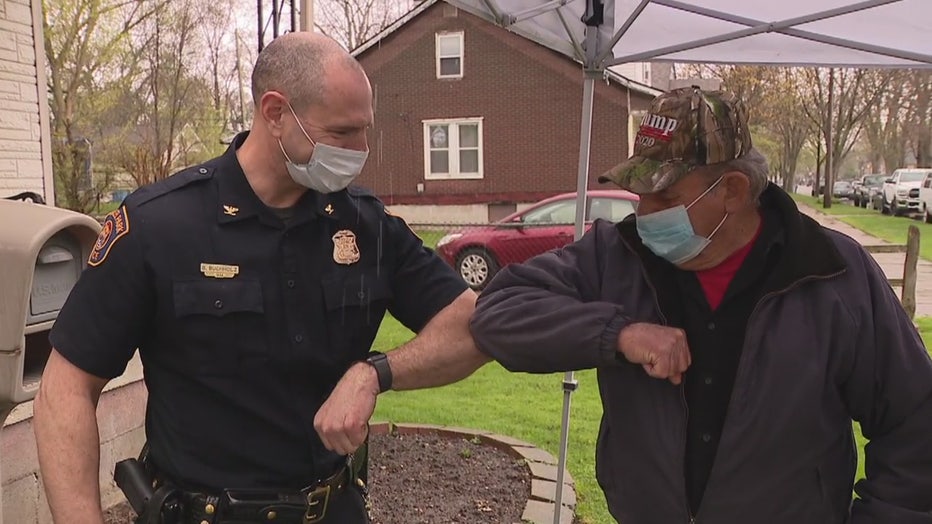 The gift cards are for every single member of the Hazel Park Police department: dispatch, patrol officers, detectives, administrative assistants. They're worth $25 each.

Finken contributed $20 and when Pizza Connection realized what the gift cards were for, they donated the extra five dollars for each.

Hazel Park Police are taking extra precautions and are wearing the proper PPE. In some cases, if they can, police are taking reports over the phone. They also go through a screening process before heading out to calls so they know what to expect when they arrive.