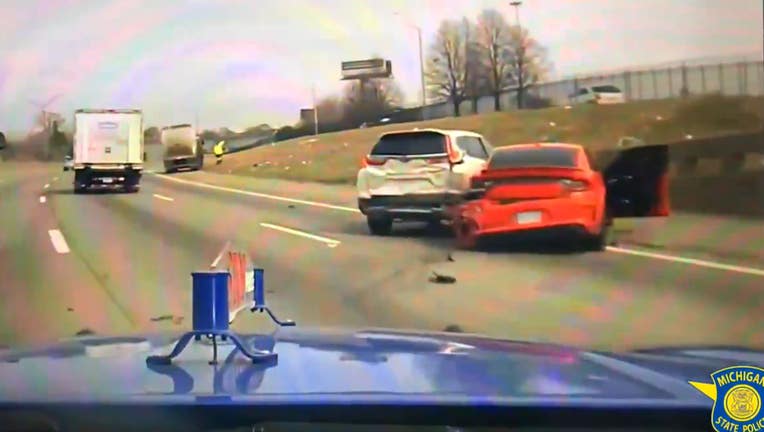 DETROIT (FOX 2) - A man in a stolen Dodge Charger sped past a Michigan State Police trooper on I-75 Tuesday afternoon before crashing in Detroit.

Watch dashcam video of the incident below.

Michigan State Police said a suspected stolen Dodge Charger was doing 120 MPH on I-75 near Holbrook Tuesday afternoon when it passed an MSP trooper and crashed into another car.

Police said the driver was going more than 120 mph when he lost control in the area of Holbrook and crashed into an SUV and garbage truck around 12:25 p.m. The man fled on foot, leaving an empty pistol holder in the car, police said.

A witness provided a description of the driver, and Hamtramck police found the man. A police K-9 was brought to search the crash scene and found a loaded Glock pistol with a 50-round drum magazine, police said.

Police said the Charger was stolen in Georgia.

Detroit police said they believe the car is possibly one that has fled their officers several times in the past week. DPD plans to work with MSP to secure additional charges against the driver.