Around 5:45 in the morning, several suspects tried robbing a business on Seven Mile by using the truck as a battering ram through the front door. After bumping over the parking space barriers and colliding with the front doors, the driver quickly discovers the truck won't move.

Surveillance footage shows the driver of the truck attempting to drive away, but with no luck. Gray smoke soon follows.

Redford Township police are looking for three suspects in a failed snatch-and-grab attempt Monday morning. After backing their truck into the front doors of the store, the suspects couldn't drive off with the stolen vehicle.

"It was wedged in," said one person watching the video.

That was failed effort number one.

After entering the store, the thieves also were unable to break into the business office or the ATM inside the store.

Upon their realization the stolen truck won't move and they won't steal any extra funds, the thieves jump over the protruding trapped silver Dodge pickup and make a run for it.

The store owner said someone riding a bus passing by noticed the truck sticking out of the store and called 911. 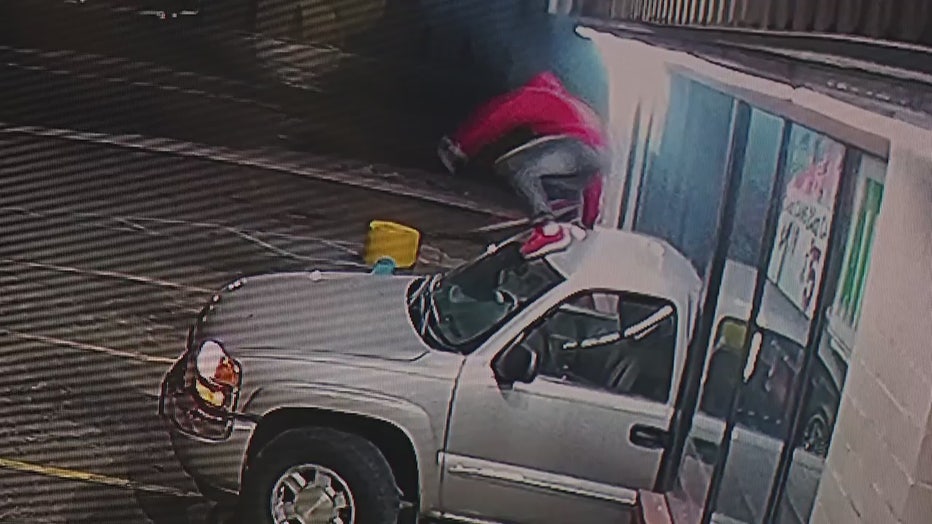 Unfortunately, the liquor store owners are on the hook for any repairs. Police ask if anyone recognizes the suspects to contact them.