The Sterling Heights Police Department is commending its officers for arresting multiple suspects in the middle of a break-in at a pharmacy last week.

STERLING HEIGHTS, Mich. (FOX 2) - The Sterling Heights Police Department has released bodycam video as officers stopped a breaking and entering in progress and chased down the suspects responsible.

According to the police department, Sgt. Tony Roeske stopped a break-in at Ryan Health Pharmacy on Friday, Sept 9.

Roeske was on the lookout for suspects breaking into local pharmacies around 3 that morning when watched a white Dodge Journey pull up to the back doors of the pharmacy.

The suspects pulled the SUV into the parking lot and then backed up towards the back door and then smashed their way into the business.

Once they went inside, Roeske pulled his patrol vehicle up to the bumper of the SUV to block them in as other officers responded to the pharmacy. 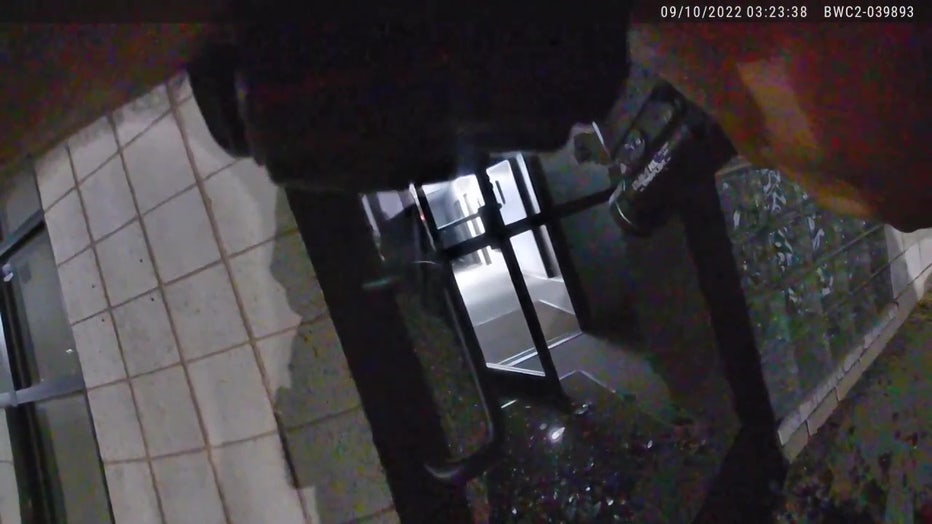 Sterling Heights Police Sgt. Tony Roeske stopped a breaking and entering in progress after watching suspects smash their way into a pharmacy on Friday, Sept. 9.

In bodycam video of Roeske, he is outside the store with glass shattered all over the ground as he whispers instructions to other officers. He then waits outside the business as suspects can be seen inside. As Probationary Officers Bryce Elliott and Colton Conley responded, they enter and command them to put their hands up but the suspects run out the front door.

The officers chased down at least one on the other side of the building and take him into custody pretty quickly after he started running.

Sterling Heights Police said one suspect was taken into custody and others are under investigation.