MONDAY NEWS HIT - A Detroit Democrat has received multiple threats including one telling her she should be lynched after several Michigan lawmakers participated in a hearing on election fraud last week.

Rep. Cynthia Johnson was among three Democrats on the House Oversight Committee that listened to testimony from several residents arguing they witnessed election fraud in the 2020 election in November. 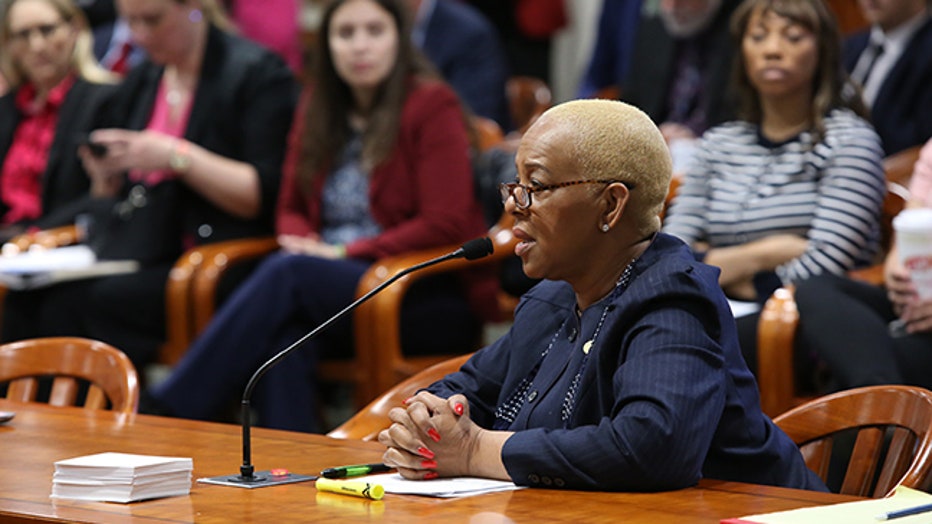 "You should be swinging from a (expletive) rope you Democrat," said part of a voicemail left on Johnson's phone, amid several other racist remarks and references of violence.

Johnson posted the audio recording on her Facebook page over the weekend, along with several other screenshots of her phone's call log showing unanswered calls from cities around the country.

The voicemail threatening to lynch Johnson came from a woman in Wheeling, Illinois, based on the number associated with the call. Another message from two men that Johnson didn't post mentioned similar threats, telling her "Your time is coming... from the (expletive) gallows you'll be hanging."

Threats toward lawmakers have become increasingly pervasive in the U.S. as the country works to certify the election. Both Democrats and Republicans say they have received death threats from anonymous callers unhappy with their efforts pursuing election fraud.

That includes Monica Palmer, the Wayne County Canvassing Board member who said she received death threats after reversing her vote and certifying the election a few weeks ago. The threats aren't isolated to Michigan, with the Georgia Secretary of State also warning of a ramping up of rhetoric as he has refused to overturn the state's results.

So far, no credible accusations of election fraud have been found on any level large enough to overturn the election. That includes the 154,000 vote lead that President-elect Joe Biden has over President Donald Trump in Michigan.

Whitmer wants $400 million in stimulus, but will it happen?

Between Michigan's governor and the state budget director, the two are requesting an additional $400 million in aid to help small businesses stay afloat during the pandemic.

It's a lot of money to ask for even as the state looks forward to a widening deficit in its budget in the years ahead. However, with the possibility of federal assistance still in limbo, it may be the best option going forward, one Michigan Republican said.

"There's a definite appetite for the legislature to look at helping our small businesses that are suffering, helping those that have been shut down due to the governor's orders to make sure they're getting the assistance they need and there are employees that are obviously affected by that," said House Majority Whip Jason Sheppard.

Some counties estimate that at least a quarter of all small businesses have shut down due to COVID-19 restrictions that have persisted throughout the year. Even if the state's newest measures lift on Tuesday, many will still require extra help to stay open.

While the relationship between Gov. Gretchen Whitmer and the Republican legislature has been icy throughout the year, Sheppard says talks are ongoing and is confident something can be done.

"Can we come to an agreement? Yeah. In state government, there's always a pathway to agreement between the Rs and the Ds," he said.

If the federal government does manage to pass relief, then it could be appropriated to places where Michigan's state government has had to take out money. But a deal is still in limbo and other federal programs helping individuals are set to end this month.

"The ability to utilize the relief funds already issued by the federal government goes away at the end of this calendar year, and the tremendous pressure that already exists on our General Fund could be partially alleviated with additional federal aid," said State Budget Director Chris Kolb in a statement.

Several dozen protesters converged on the Michigan Secretary of State's home Sunday, some of them armed and shouting obscenities in the latest manifestation of election-related tensions.

"As my four-year-old son and I were finishing up decorating the house for Christmas on Saturday night, and he was about to sit down to watch House the Grinch Stole Christmas, dozens of armed individuals stood outside my home shouting obscenities and chanting into bullhorns in the dark of night," read a statement from Sec. Jocelyn Benson.

Benson said a line was crossed because the primary purpose of the event was to intimidate her. "They targeted me in my role as Michigan's Chief Election Officer," she said. "But the threats of those gathered weren't actually aimed at me - or any other elected officials in this state. They were aimed at the voters."

Benson attributes the incident to an array of misinformation and bogus political legislative hearings that have only ramped up paranoia about Michigan's election being fraudulent.

Michigan's Attorney General and the Wayne County prosecutor released a joint statement calling the behavior "mob-like" and referring to it as an "affront to basic morality and decency."

"In a civil society, there are many ways to peaceably assemble and demonstrate. Anyone can air legitimate grievances to Secretary Benson's office through civil and democratic means, but terrorizing children and families at their own homes is not activism."

The state's three-week pause on some business and school operations will officially end Tuesday unless the governor extends the order.

Gretchen Whitmer hasn't indicated if she has any interest in doing so, arguing the test positivity and hospitalization rate linked to COVID-19 will be the biggest determinants for whether the state should reopen.

The state's restrictions on businesses and schools originally set for three weeks will end on Tuesday. However, it's not clear if the governor will extend the lockdown measures further.

With Thanksgiving having passed and COVID-19 cases beginning to level out in the state, health officials are holding their breath that Michigan's hospitals can continue functioning without reaching capacity.

However, several facilities are already nearing that benchmark, meaning increasingly difficult decisions could be on the horizon for nurses and doctors as ICU beds fill up.

A judge said a man can take forensic images of election equipment in a northern Michigan county that had problems with vote totals for Joe Biden and President Donald Trump.

But the order makes no mention of Antrim County’s presidential results, which were corrected and ended in Trump’s favor. Instead, resident William Bailey seems concerned about the vote on a marijuana proposal in the village of Central Lake.

An ordinance to allow a marijuana retailer was tied, 262-262, which means a loss. But when ballots were counted again, the proposal passed by one vote. Bailey alleged that three ballots damaged during the retabulation weren’t included in the revised result.

Bailey “is entitled to have his vote counted and the (county) has a duty to maintain an accurate and secure election,” Judge Kevin Elsenheimer said Friday.

The forensic imaging was underway Sunday with many observers, including lawyers and a member of the sheriff’s department, county spokesman Jeremy Scott said.

“Transparency in this and all of our work has always been a top priority for us,” said Sheryl Guy, the county clerk.

Immediately after the Nov. 3 election, the county reported that Biden had won the local vote in an area that typically goes Republican. But Trump was subsequently declared the winner, and the mistake was attributed to human error, not equipment problems.

The Associated Press published this report

This week will climb into the high 40s before dipping back down into the 30s. Monday will be the coldest day of the week with a high of 38 and a low of 23.

Monday flurries and continued cold. Temps are heading up through the week.

President Donald Trump said Sunday his personal attorney Rudy Giuliani has tested positive for the coronavirus, making him the latest in Trump’s inner circle to contract the disease that is now surging across the U.S.

Giuliani was admitted Sunday to Georgetown University Medical Center in Washington, according to a person familiar with the matter who was not authorized to speak publicly.

The 76-year-old former New York mayor has traveled extensively to battleground states in recent days and weeks in an effort to help Trump subvert his election loss. On numerous occasions, he has met with local officials for hours at a time without wearing a mask.

Trump, who confirmed Giuliani’s positive test in a Sunday afternoon tweet, wished him a speedy recovery.