The 2023 fiscal year budget for the state of Michigan was officially signed on Wednesday by Governor Gretchen Whitmer and she said the deal is going to help a lot of Michigan families.

Negotiators met behind the scenes for weeks to develop the budget proposal and announced a deal in late June. But they couldn’t agree on how to lower taxes, which is possible thanks to a flood of federal money and anticipated higher tax revenue.

Whitmer, a Democrat, has called for targeted cuts, while Republicans want broader ones including lower individual and corporate income tax rates.

Officials estimate that $7 billion in extra revenue is available to account for any tax deal that leaders can produce. But it’s unclear where Michigan leaders’ talks on that stand.

Whitmer on Wednesday repeated her preference for targeted cuts and said she hopes to make progress when lawmakers return to the Capitol this fall.

"We still have an opportunity in front of us to do more, and I am hopeful we will be able to do that," she said.

The broader budget that Whitmer signed puts $6 billion toward state and local roads, bridges and other transportation projects. It also puts about $2.6 billion toward public pension systems. 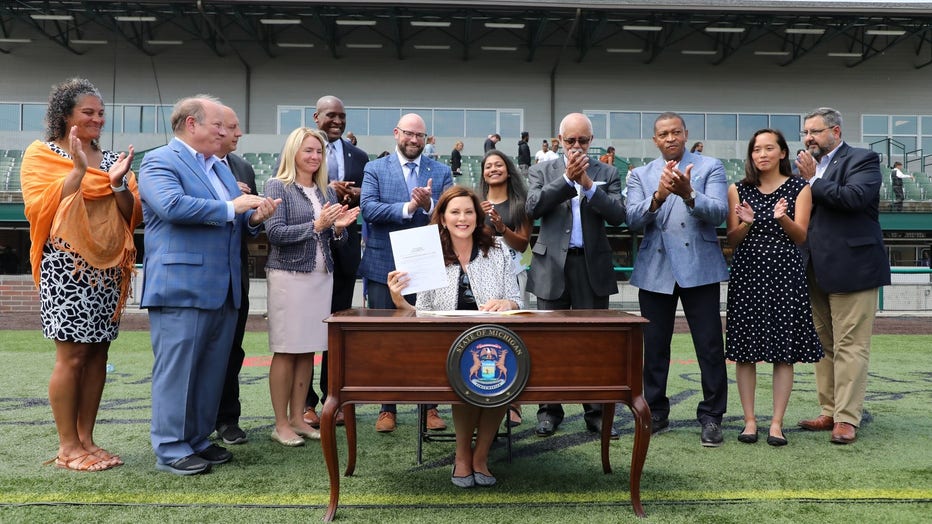 Whitmer highlighted plans to bring the state’s "rainy day fund" to $1.6 billion as a precaution against an economic downturn. She also pushed legislators to focus on infrastructure that will support innovation, health care and youth needs around the state, including a state psychiatric youth facility and a cancer research facility at Wayne State University.

The governor also touted the education budget she signed this month, which added $450 to the per student funding for K-12 schools, which is roughly a 5.2% increase. The state Department of Education has said the $9,150 commitment per student marks the highest total in Michigan’s history.

The governor’s vetoes largely focused on anti-abortion causes and totaled about $20 million in spending cuts. That’s just a small slice of the budget but again demonstrated the stark political divide over abortion rights in Michigan following the U.S. Supreme Court’s decision to overturn Roe v. Wade.

Abortion remains legal in the state thanks to a judge’s injunction in a lawsuit filed by Planned Parenthood, which is challenging Michigan’s long-unenforced 1931 law banning abortion unless it is "necessary to preserve" life.

Whitmer said none of her decisions should surprise Republicans who control the both legislative chambers.

Her vetoes included $10 million for a marketing program promoting adoption over abortion, $3 million for organizations that promote "childbirth and alternatives to abortion," and $100,000 designated for legal defense of a ban on gender reassignment surgeries or therapies while people are in state prisons.

State Rep. Thomas Albert, a Republican from Lowell who chairs the House Appropriations Committee, said in a statement this week that Whitmer’s vetoes "support only one option for women in a crisis pregnancy — the deadly choice of abortion."

"It is shocking that the governor, and her far left political base, are now so extreme that helping pregnant women who might consider adoption instead is now a bridge too far," Albert said.