The problems for Ford and General Motors continues to pile as Ambassador Bridge access has forced both companies to shutter plants while it manages the fallout of a protest at the international crossing.

DETROIT - While the Ambassador Bridge is technically open, by all accounts the remaining access available to drivers traveling from Canada into the U.S. is also shut down.

Speaking with a local radio station in Windsor Thursday morning, the Mayor Drew Dilkens reiterated that while the bridge is technically open, "It really isn't."

"This is getting really tiring. Those folks need to go home. This will not last for long, that I can assure you," he said during an interview on AM800 CKLW, a Windsor-based radio station.

However, the mayor argued that any response by police or any other municipality would need to be measured. He couldn't just have all of them removed at once, Dilkens said.

He also said that many of the protesters were "mentally unstable" and dealing with people's temperament is a "real issue." 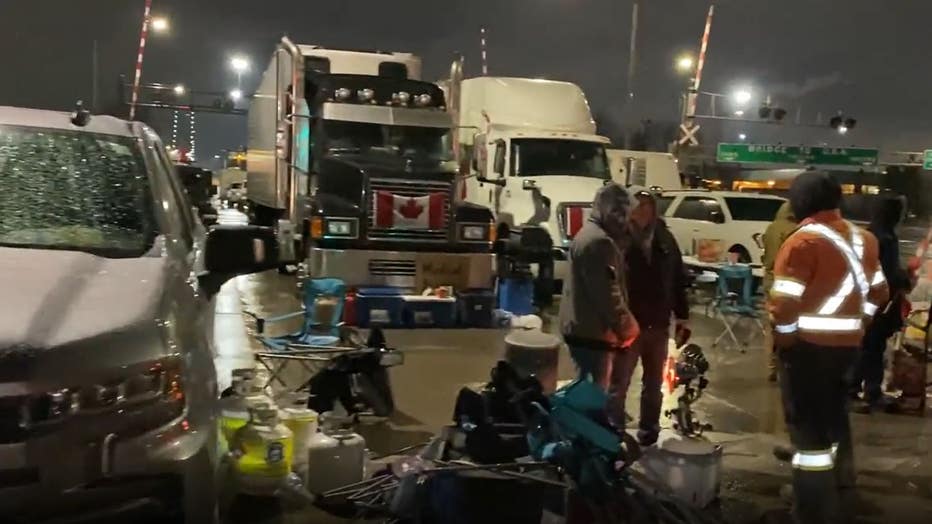 Windsor Police said in an email that the Ambassador Bridge is not closed US Bound, but "the presence of demonstrators are making it difficult to access the bridge."

"We are urging all motorists to avoid both access points to the bridge. All those attempting to cross the Ambassador Bridge should expect significant delays," wrote Constable Talya Natyshak, a member of the Windsor Police Service's Corporate Communications Unit.

What started as a small protest by a group of Canadian truckers upset with the country's COVID-19 vaccine mandate has turned into an international incident affecting regional trade and resulting in the shuttering of multiple automotive plants that rely on open access on the Ambassador Bridge.

RELATED: 'I understand why, but it makes it harder on us': Canadian trucker talks lost time, money

Trucks have instead been rerouted to the Blue Water Bridge in Port Huron. But that has come with its own headache as the bridge is unable to manage the surge in traffic that would usually drive through Detroit and into Windsor.

Related: Trucker shortage combined with Canadian protests a 'crisis on top of a crisis' for supply chain

Several dozen demonstrators could be seen outside Thursday morning. Many were hovering around space heaters and grills, with big rig semi-trucks in the background. A sign read "Leaders Dont Hide." (sic)

The bridge protest is the latest struggle for businesses that are already suffering from supply chain shortages due to the pandemic. "It is a crisis on top of a crisis," said the president of the Michigan Agri-Business Association.

"I can tell you all of them right now are scrambling to find enough drivers especially drivers who can cross the border into Canada," said Chuck Lippstreu.

It's also forced many truck drivers into the middle of events out of their control. But even so, they're losing money as a result.

"Coming back last night I didn’t have enough hours to get back, so I waited until this morning - it was three hours to get back," Seth Allen told FOX 2 Wednesday. "It adds time to a run and at the end of the week, we get less miles than we normally get, and we get paid by the mile."

General Motors and Ford are also losing money. On Wednesday, GM announced it would cancel the second shift at its Delta Plant in Lansing. In a statement to FOX 2 on Wednesday, Ford said the protest "hurts customers, auto workers, suppliers, communities and companies on both sides of the border…"

The statement confirmed they had enough engine inventory to support its U.S. plants, but were running at a reduced schedule in Oakville. Its Windsor engine plant is currently down.

It's unclear what a resolution will look like due to the large number of truck drivers that are currently unvaccinated and unable to cross the border. The former head of the Michigan Trucking Association said this was the drivers' "line in the sand."

He says with the way we depend on our southeastern region borders for production and commerce, it's in the government's best interest to lift the vaccine requirement for truck drivers.

"The borders have become invisible, we have grown with great efficiency," Blashfield said. "A product may go back and forth across the border seven or eight times before it is assembled in a finished vehicle and then can be sold on either side of the border."