FOX 2 - Say hi to Ethan, a plumber whose customers says is a real drip.

Ethan's a drain expert. his customers say, good at draining their wallets. A plumber driving his customers plumb-crazy with excuses for not showing up.

Ethan's a drain expert. his customers say, good at draining their wallets. A plumber driving his customers plumb-crazy with excuses for not showing up.

This is Ethan Mckarge on Facebook. He's got a cool nickname - Ethan Mack. The guy likes cars, but cruising Facebook seems to be how he gets customers for his plumbing company.

"I posted on Facebook if there's any plumbers or anyone that could come out and tell us what's going on," said Isabel. "Ethan responded with his company page saying he would give us a free estimate."

Isabel and her boyfriend just bought their first house but had problems with the sump pump. They paid Ethan $3,200 to replace it.

Instead, Isabel says Ethan just broke up their cement basement, made excuses, and finally never came back.

"I'm in college. My boyfriend's a firefighter. We both work hard for our money and to lose all that money was hard on us," she said.

A check for $1,900.  That was a down payment for Ethan to put a bathroom in the basement of Don's Taylor home.

Once in a while Ethan would come by and do a little work, but he had a lot of excuses for not finishing.

These are real messages he sent to Don:.

Ethan had a broken tie rod on his car.

And finally, "I'll be over. I'm heading over to pick the girlfriend up from colonoscopy."

Now that's a buttload of excuses. And the project was left an unfinished mess.

"I wish I could talk better about him but I can't," Don said.

Rob started watching Ethan. He drives around in this big truck. There's no sign advertising his Mckarge plumbing on it and in fact, there's not even a license plate.

And according to the Secretary of State, Ethan doesn't even have a valid driver's license. It's suspended.

If he's got a plumbing license, Wolchek sure can't find a record of it. But that's okay because Rob never saw him doing any plumbing.

The closest he came to actually doing anything other than hang around with his car racing buddies or waiting in a long line at the smoothie drive-through, was making what appears to be a sales call. 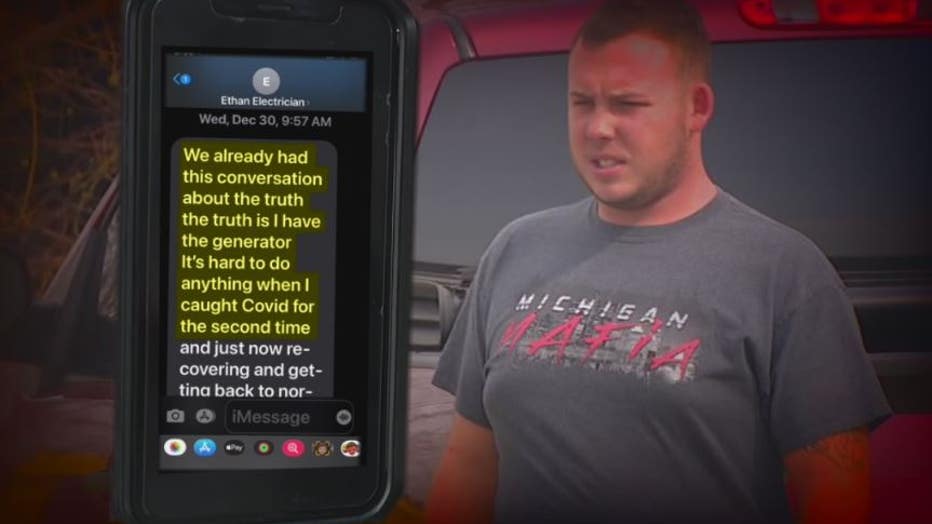 Plumber Ethan Mckarge's texted excuses for unfinished work according to one customer.

Even then, he never pulled out a pipe wrench or a plunger. After a few minutes he was back on the road to doing nothing.. And absolutely nothing is what he did for Goldie.

"I trusted him," Goldie said.

Goldie paid Ethan a $3,200 down payment on the purchase and installation of the generator.

But getting Ethan the plumber to do the job, was just a pipe dream.

His first excuse was he had to go to Port Huron to pick up the generator. Port Huron's 100 miles away from Goldie's Dearborn Heights house. It seems like Metro Detroit would have lots of generator places nearby.

Then, Goldie got this text:

In February, she was contacted with "Not ignoring you. Sitting in the hospital dealing with the current situation."

Wolchek: "How does that make you feel?"

And she wants this plumber flushed out.

"That's why I called you Rob," she said. 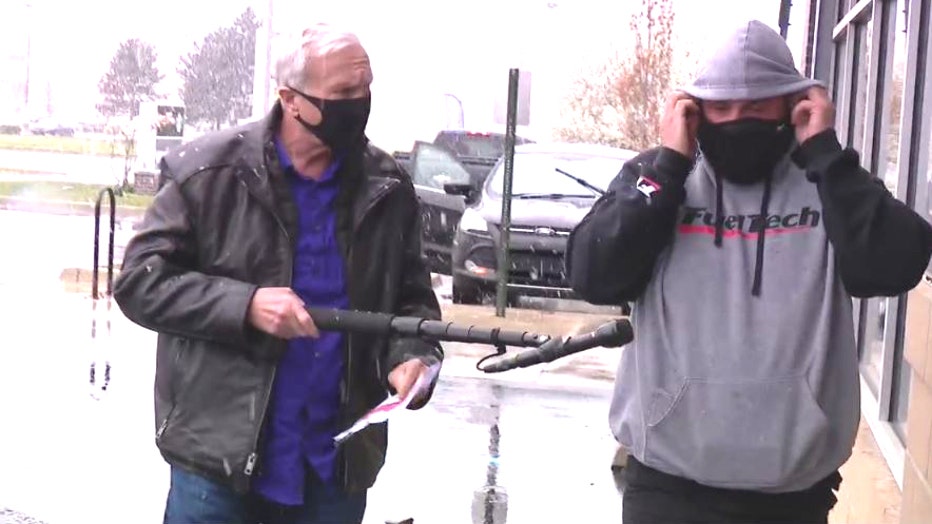 A little while later and Rob finds his man.

Wolchek: "How you feeling today? You all right?"

Wolchek: "How come you never did this job for this lady Goldie? You kept telling her you were sick all the time?  You took $3,200 dollars to put in a generator?  What happened with that?

"Ethan talk to me. Hey dude, talk to me! Are you kidding me?

"What about Isabella and Don? Talk to me man. You don't have a driver's license Ethan!"

Hey Ethan the plumber, it's time for you to tap out. and submit to the Hhhhhalll of Shame!"