Police are investigating a violent attack on board a flight to Detroit on 9/11, with the victim allegedly targeted because she's Muslim.

FOX 2 - Police are investigating a violent attack on board a flight to Detroit on 9/11, with the victim allegedly targeted because she's Muslim.

"The woman told her to shut up and called her an 'f-ing Muslim terrorist,' and then hit her," said Dawud Walid.

A picture was taken of the allegedly out-of-control passenger onboard a Spirit flight from Atlanta to Detroit on the anniversary of 9/11.

"It was a physical strike to the face from what we were told and she actually touched her multiple times," Walid said.

As the plane taxied to the gate Saturday - Aicha Toure was said to be sticking up for an elderly woman, whose bag fell on the suspect.

It turned into a tirade against Toure, who was wearing a headscarf, then got physical before flight attendants jumped in.

"It makes me sad that it happens but I’m not totally surprised," Walid said.

Dawud Walid runs the Council on American-Islamic Relations and is now representing Toure in a potential civil suit.

She’s not hurt, but emotionally scarred.

"This, in our mind, rises to the degree of a hate crime or ethnic intimidation," he said. 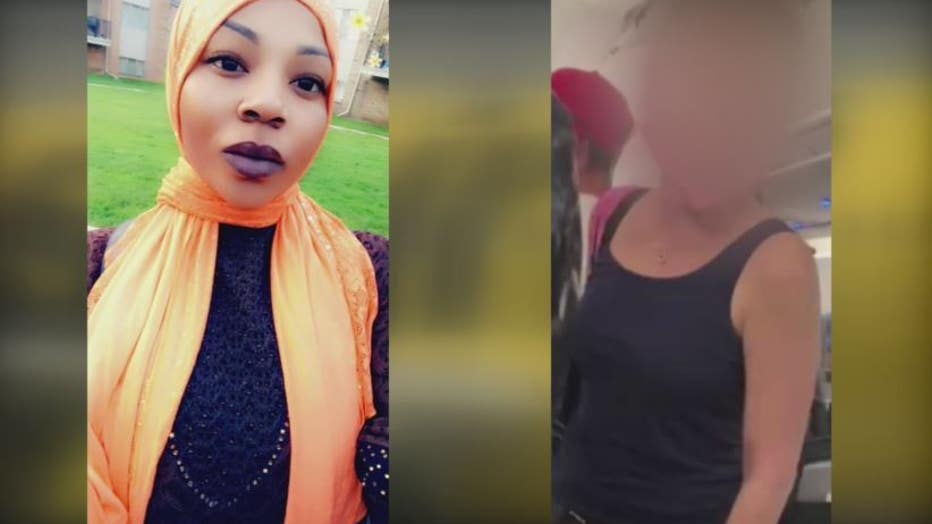 Victim Aicha Toure, left, the woman under investigation for the assault aboard the plane, right.

The woman was arrested by airport police and was cited for assault and disorderly conduct.

Walid says – this is the second anti-Muslim motivated crime in our area to happen on 9/11. They’re looking into a situation outside of Flint – where a mosque was vandalized. The sign was etched off – and lights broken.

CAIR is offering a $1,000 reward for information on whoever did this.

"There are some people who see on the 20th-anniversary tragedy of 9/11, they look at their fellow Americans as somehow being enemies," he said.

The woman is banned for life from flying Spirit, while police investigate and the possibility of hate crime and or ethnic intimidation charges added.