(FOX 2) - The Bronco, one of Ford Motor Company's most iconic vehicles, made its comeback this summer - and a Michigan family legacy is behind its style and precision.

Frank Debono was a clay modeler for 40 years at Ford and has passed down his talent and his tools to his granddaughter, Molly Gillies.

Clay modeling at Ford passed from generation to generation

"When all of this was happening, he was suffering from dementia so he just kind of gave me the tools. Nothing was really set but it was kind of just like a passing of the torch, here you go," she said.

Molly knew she wanted to follow in her grandpa's footsteps. With those tools in hand, she embarked on an internship at Ford before coming back to the automaker. She was given an assignment that has very much molded her family history - she was assigned to work on the same project her grandfather did.

"I think about he went through a struggle in the beginning of his career and he lasted 40 years, didn't let the bad days get to him and became a manager. So I keep that in mind every day. Everything I work on, when maybe I don't know exactly what I'm doing and I don't have the confidence I need to just tell myself to have the confidence and know that he's proud of me and what I do every day and I need to think about constantly him while I'm working on it." 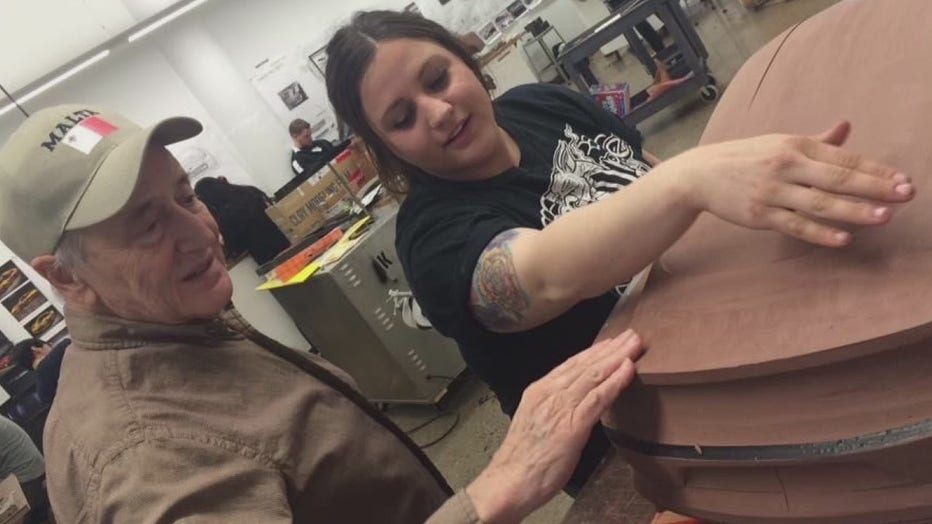 The tools are the same but the job is a little different nowadays.

It starts on the computer where a 2-D model is made. Machines and technology have changed the work but no matter how much technology you bring in shaping something out of nothing is still magical, like when her grandfather did it. But it's also hard work.

"It is nerve-racking because, and I thank my boss every day for this because he kind of threw me on it and said here you go. So I was super nervous, especially with the Bronco, it's such an iconic thing for me and for everybody else too but I just do it. There's nothing that you can mess up that someone can come in and help you fix, so just go and do it. And then as soon as you get into a groove and you understand what needs to happen, it's very meditative, and it's OK this is why I'm doing this.

"We're making these vehicles for humans so we need to be able to put that human touch back into the design process, or keep it there I should say. It puts the love into the clay' it puts the passion into it."

The same vehicle, the same work ethic. It's all in the family.