Five days after D-Day, Raymond Tarabusi's Army platoon was called on to fight. He would go on to receive two Purple Hearts during his World War II service.

ROCHESTER HILLS, Mich. (FOX 2) - On D-Day, Raymond Tarabusi was stationed in England while soldiers stormed the beaches of Normandy. Five days later, his Army platoon was called up to join them as replacement troops on the front line.

"My time in the service, in combat, was only three months. One day would have been enough," he said. "Quite a spectacle - there were bodies in the ditches - they were American and Germans and that was my first impression of what I seen, and I wasn't too excited about that."

Tarabusi, who is now 96, inherited the gun of a fellow soldier who died and went on to fight at 18. 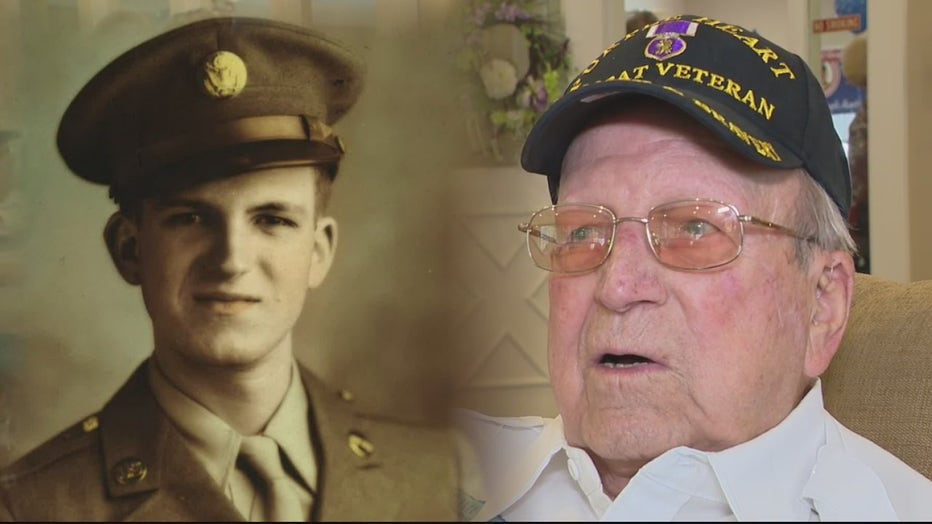 "I sense an artillery shell coming in, and I hit the ground and it exploded right next to me, like about  no more than a foot away.  I was covered with dirt and smoke, and I knew I was hit," he said.

He still managed to get up and finish running across that field.

"Three minutes later the Germans had three more shells coming in the same place that I just left, so had I stayed I wouldn't be here today," Tarabusi said.

He remembers making it to the first aid station.

"They dressed my wound, and they gave me a Purple Heart," he said.

Then they sent him back to his unit. Five days later he was struck again while on guard duty.

"I heard a pop, two pops, and next thing I was hit in the foot and that was a real wound. I couldn't walk anymore. I had to be carried away from there," Tarabusi said.

He was flown back to England where he recuperated before going back to the front lines once again. It's an experience he still remembers so clearly.

"Old soldiers never die - they just fade away, but the memories are there like it was yesterday," he said.

He is one of the few left to tell the stories.

"I am probably the last guy left in our division," he said.

D-Say's always been a special day for my dad . He's always celebrated it, and he'll never forget it, and he is possibly one of the last ones that was over there," said his daughter Gail Kevwitch.

Tarabusi children visited with him at American House Elmwood in Rochester Hills on the 78th anniversary to honor their father and all of those who served in this historic mission.

"We're proud to have a father that served in WWII, the greatest generation, and he's still around to talk about it and to tell people his story, and it really inspires a lot of people," Kevwitch said.

When thanked for his service, Tarabusi has a simple response – "I was there and I did my job, and that's all I could do."