WYANDOTTE, Mich. (FOX 2) - Detectives in Wyandotte are working to find out the scope of the suspected crimes after a routine traffic stop led to a pile of evidence.

"They had a police badge and other police gear including cuffs and a handcuff case," said Archie Hamilton, Wyandotte deputy police chief. "Were they out there impersonating the police?"

Police say they found meth and cocaine in the car during the arrest as well as "thousands of dollars of stolen goods," Hamilton said, which included lottery tickets, diabetes test strips, and purses.

It all started around 10 p.m. that night at the CVS on Ford and Fort where an officer saw the suspects driving away from the store.

"They were in such a hurry they exited the drive without yielding or stopping," said Hamilton. "So therefore officer tried to conduct a traffic stop."

The pursuit led to a neighborhood where the driver was arrested a few blocks away.

"As he is placing the driver into custody, the driver indicates that the passenger is armed with a handgun," Hamilton said.

That passenger had bailed from the car. As for his gun, it was just a BB gun fashioned to look like a handgun, the deputy chief added. 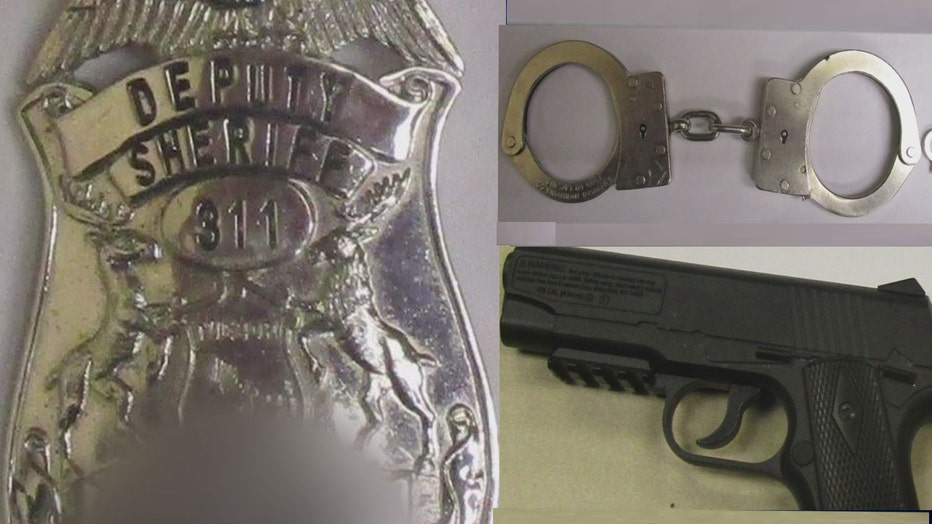 A fake badge, handcuffs, and a BB gun made to look like a real pistol was found on the suspects by Wyandotte police.

The second of two suspects was cornered and he tried to hide in a tree or shrub.

Police say all the evidence collected will be analyzed to see what crimes they potentially committed in the past.

"They had many tools in there that can break into buildings and homes including a lock-pick set," Hamilton said.

And the deputy chief is pretty convinced the work of the officers likely saved someone else, from falling victim in this case.

"It was just a minor traffic stop, they failed to yield coming out of the driveway, but it turned into something so much bigger," Hamilton said.

The two suspects are being held by police while the investigation continues. It is expected they will be arraigned on initial charges as soon as Thursday.