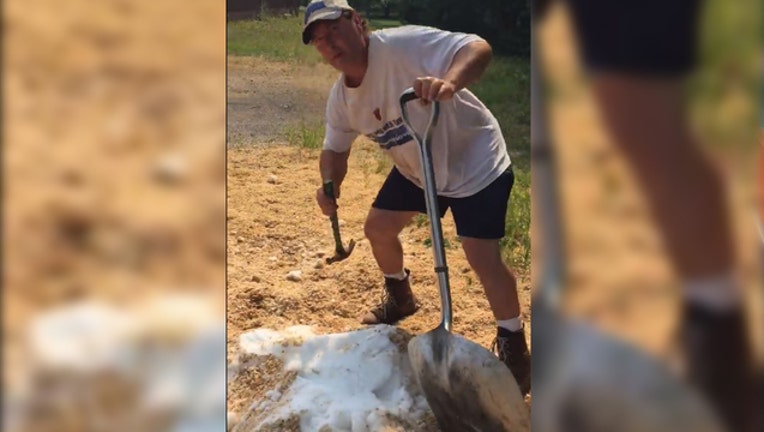 Buried underneath about eight inches of saw dust was a Michigan winter's last breath of cold - a middle finger to anyone who thinks the cold season can be beat. On the Keweeneaw Peninsula, about 25 miles south of Copper Harbor, a mound of snow sat unassuming, and uninterested in melting.

The baffling discovery appeared in a video posted to Facebook on July 24. Accompanying the incredible sight was an equally incredible narration.

"It's been 85-90 degrees in the Keweenaw, Upper Peninsula Michigan, and guess what I found?" said Mark Mezydlo in the video.

"I have no idea," responded Sandra Turnquist, Mezydlo's girlfriend and filmer as she follows him.

He's holding a shovel and adorning a ripped-up white Chicago Bears T-shirt that's smeared with dirt and sweat. Judging by the beads of sweat on his head, it's a hot one in northern Michigan.

"What is this? Holy cow. It's the last plow mound of Keweenaw. This has got to be a record," said Mezydlo.

It might be. An official said the National Weather Service in Marquette, MI said any snow sticking around this long into the year would have to be in a dark, moist area that isn't touched by the sun.

As Mezydlo is standing over the untainted plot of white powder, he hacks away at the pile with his shovel and hammer as spits of snow fly everywhere.

Residing in Mohawk, Michigan, Mezydlo works at Sickler Industries, a saw mill that cuts panels and flooring. He suspects that the saw dust from the mill insulated any summer heat from warming the snow.

"I was looking for kindling and when I was standing on it, I bent down and thought 'why is this so solid?'" he said in an interview. "I brushed away like eight inches of shavings and there it was."

A bad winter in 2014 left floating ice bergs into June. But, in the 17 years living in the Keewenaw Peninsula, he's never seen snow so late into the year.

As of 1 p.m. Friday, the video had accrued more than 250,000 thousand views on Facebook. For both Mezydlo and Turnquist, the burst of fame has been a shocking one.

"A friend of mine asked if she could share it...so I made it public," said Turnquist, who works as the director of student financial services at Finlandia University. "We went to bed and all of a sudden, it blew up. We thought 'just what in the world?'"

The surprise at the video's viral boom was matched only by the hundreds of thousands of people who couldn't believe there's still evidence of winter in the seventh month of the year.

When Turnquist posted the video, she commented saying "I think I'm a little bit devastated."

I think we all are.