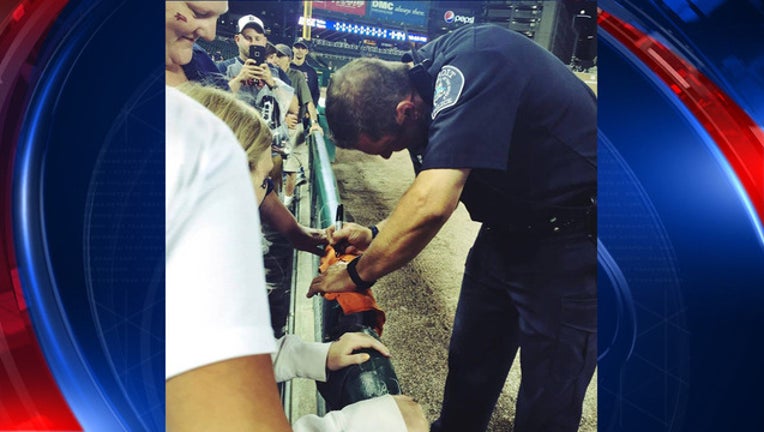 DETROIT (WJBK) - The Detroit Police Department shared a touching story involving one of its officers at a Detroit Tigers game earlier this week when a young fan wanted an autograph - any autograph - from her first game.

Here's how it happened: a Tigers fan was at the game on Wednesday night when a young girl and her mother approached the fence. The game had ended and the players were heading into the clubhouse.

The girl wanted an autograph from a player. You see, it was her first game and was hoping to score a signature - any signature. The problem was, she was too late. The players had all disappeared into the clubhouse.

So they tried asking the bat boy, but didn't get anywhere. Then the mother asked an EMT. The EMT told a nearby officer because he thought the mother was joking.

She was completely serious. She wanted an autograph - any autograph - for her daughter since it was her first game. She said any signature would complete it.

So the Detroit Police Officer walked over and asked again.

The mother said of course. So he had a sharpie and signed his name on the little girl's shirt. The EMT added their signature as well.

The department shared the story via its Facebook page from a 'Facebook friend' who watched it happen. The friend looked down at the little girl and said "that autograph was better than any baseball player's because it was from a real Detroit Police Officer."

It doesn't end there. The mother also asked for their signatures too on her Justin Verlander jersey because it was her first game as well.