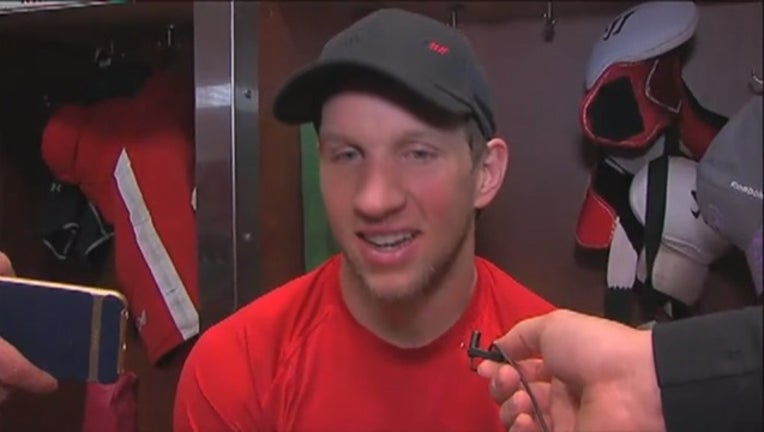 VANCOUVER, British Columbia (AP) - The Detroit Red Wings and Vancouver Canucks got much the same result on Tuesday night - a farewell to a veteran teammate after the game.

Justin Abdelkader scored 2:31 into overtime and Detroit beat Vancouver 3-2 while both teams dealt away players ahead of Wednesday's trade deadline.

Detroit announced during the game that it had traded forward Steve Ott to Montreal for a sixth-round pick in the 2018 draft. Ott was scratched from Tuesday's game.

"It's obviously tough, but it's part of the business," Ott said. "That Red Wing jersey meant a lot to me and it meant a lot to my family to be able to play in front of friends and family every single night as a Red Wing.

"I'm heading to a good team with another great heritage, so it's very exciting now to know that I have a chance in the playoffs."

"It was a lot of waiting around. I wasn't told anything," Hansen said of the mid-game trade. "I was sitting around for the first and second period still waiting for something, then (general manager Jim Benning) called and let me know I was being traded. It's a lot of unknowns that you have zero control over."

Abdelkader got the winner by dropping to his knees just outside the crease to one-touch a precise pass from Henrik Zetterberg.

Frans Nielsen scored twice in the first period for Detroit and Zetterberg had two assists. Petr Mrazek made 25 saves.

Reid Boucher tied it at 2 with 2:46 left in the third period for Vancouver, and Markus Granlund also scored. Ryan Miller made 25 saves.

Facing very long odds to capture the second wild card in the East, Detroit is likely to miss the playoffs for the first time since 1990. Hence the team is selling at the trade deadline, sending defenseman Brendan Smith to the New York Rangers earlier in the day in exchange for draft picks.

"It's unfortunate to see guys move on," Abdelkader said. "You wish them luck and hope they are successful, but at the same time we are not going to lay down, we are going to try to win and get points each and every night."

Detroit opened the scoring less than five minutes into the game, as Andreas Athanasiou made a nice feed from the boards to a streaking Nielsen, who lifted the puck over Miller's shoulder.

Nielsen scored his second of the night at 11:41 while on the power play. Zetterberg found Nielsen alone in the slot and the center put it away for a 2-0 lead.

Under two minutes into the second, Daniel Sedin received a pass off the boards from Henrik Sedin, then dished to Granlund in the slot to cut the lead to 2-1. It was Granlund's 16th of the year.

Fransen almost had the hat trick in the second, going 1-on-1 with Miller, but the goalie made the stop to keep it a one-goal game.

Boucher tied it with 2:46 left to play, as he wheeled around the defense and scored his first as a Canuck to ignite the crowd.

NOTES: It was Vancouver's first game without veteran Alex Burrows, who was traded Monday to Ottawa. Burrows spent his entire career with Vancouver after joining the team in 2005. ... Canucks backup goalie Jacob Markstrom was out with a lower-body injury. ... Vancouver's Nikita Tryamkin, Micheal Chaput and Chris Tanev were out the mumps.

Red Wings: Travel to Calgary for a game Friday night.