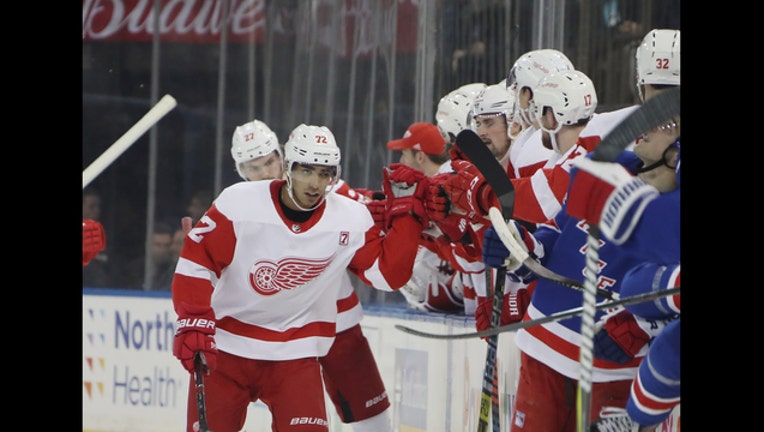 NEW YORK, NEW YORK - MARCH 19: Andreas Athanasiou #72 of the Detroit Red Wings celebrates his goal at 4:30 of the second period against the New York Rangers at Madison Square Garden on March 19, 2019. (Photo by Bruce Bennett/Getty Images)

NEW YORK (AP) - The Red Wings will miss the playoffs for the third consecutive year, but they're trying to develop a strong foundation for next season.

Detroit got two goals from Andreas Athanasiou on Tuesday night for its second straight victory, 3-2 over the New York Rangers, who are on the brink of elimination from the playoffs.

Frans Nielsen also scored and Taro Hirose recorded an assist during his NHL debut for Detroit. Jimmy Howard stopped 41 shots and improved to 10-3-3 in 16 career appearances against the Rangers.

"Nobody in the locker room wants to be in this spot a year from now," Red Wings coach Jeff Blashill said. "What wins do is give you a little bit of confidence, which helps you play your best which helps you in turn get better."

Ryan Strome and Brendan Smith scored for the Rangers, who dropped their fifth straight game. Henrik Lundqvist made 27 saves.

Athanasiou scored at 4:30 of the second period to give Detroit a 2-0 advantage. Jacob de la Rose delivered a saucer pass to set up the strike. Michael Rasumussen also assisted on Athanasiou's 27th of the season.

"He's been playing great for us," Howard said of Athanasiou. "When he's going, we are a lot better team. He is a gamebreaker."

"When we do execute our game plan we are close," Lundqvist said. "It is a game of mistakes and that's been costing us a little bit."

Nielsen opened the scoring at 17:16 of the first period when he held off defenseman John Gilmour and sneaked a wrister past Lundqvist. Hirose and Brian Lashoff assisted on the play.

The Red Wings signed Hirose as a college free agent out of Michigan State, where he led the NCAA with 50 points (15 goals, 35 assists) as a junior, and became the Spartans' highest-scoring player since 2002-03. Hirose is a finalist for the Big Ten Player of the Year Award, to be announced next week, as well as the Hobey Baker Award for the top player in college hockey.

"He definitely got the hands and the hockey IQ," Nielsen said of the rookie. "He reads the game, he sees things out there."

Strome notched his 14th of the season when he converted on the power play at 14:46 of the third period. The Rangers have struggled on the man advantage, only scoring on two of the previous 33 opportunities. Kevin Shattenkirk, skating in his 600th NHL game, and Pavel Buchnevich assisted on the play.

Athanasiou added an empty-netter, his 28th of the year, in the final minute. Smith scored his third of the season with 10 seconds left.

The Red Wings have not had a 30-goal scorer since 2008-09, when four players accomplished the feat: Marian Hossa, Johan Franzen, Pavel Datsyk and Henrik Zetterberg.

Red Wings: Visit the St. Louis Blues on Thursday in the second of a five-game trip.