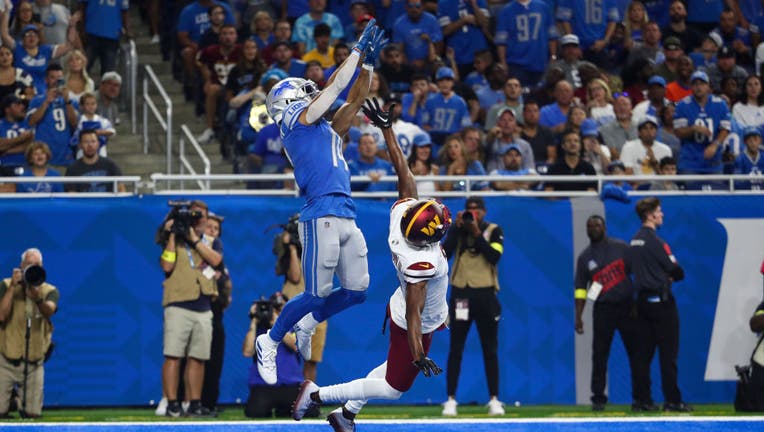 DETROIT, MI - SEPTEMBER 18: Amon-Ra St. Brown #14 of the Detroit Lions catches a touchdown pass over William Jackson III #3 of the Washington Commanders during an NFL football game at Ford Field on September 18, 2022 in Detroit, Michigan. (Photo by K

MINNEAPOLIS (AP) - When Jared Goff’s pass on the last play of the game in Detroit last year sailed across the goal line and landed in the arms of a rookie named Amon-Ra St. Brown to stick Minnesota with a stunning defeat, the identity of the receiver seemed rather insignificant at the time.

The Lions finally, in Week 13, had a win to celebrate for coach Dan Campbell.

The Vikings, then still on the fringe of the playoff race, took their most inexcusable loss in an exasperating season that essentially sealed the firing of coach Mike Zimmer one month later.

That dramatic ending on Dec. 5 also turned out to be the beginning of a remarkable run for St. Brown, who has blossomed into a legitimate star of a potent Lions offense. The fourth-round draft pick out of USC has eight or more receptions in eight consecutive games, tied for the longest such streak in NFL history.

"He’s as steady as a rock. You can always depend on what he is going to bring every day, not just on Sunday, but on Wednesday, Thursday, and Friday," Campbell said. "He’s been that way since he walked in the door as a rookie, and nothing has changed."

That touchdown catch to beat the Vikings last year was the first of his career. From that day through last week’s 36-27 win over Washington, St. Brown has 68 receptions for 740 yards and eight touchdowns. He even ran twice for 68 yards against the Commanders.

MORE: How to watch Lions vs. Vikings this Sunday

"He runs good routes. He gets himself open," said Goff, who’s also in his second season with Detroit. "It hasn’t felt forced. That’s why it kind of jumps up on us, ‘Wow, it’s been eight games in a row,’ or whatever it is. It’s just kind of been natural."

St. Brown, whose older brother Equanimeous St. Brown is a wide receiver for Chicago after four seasons with Green Bay, is the son of a champion bodybuilder, John St. Brown. His mother, who’s from Germany, guided the two boys to learn both French and German.

His background is already unique, but he’s driven to make himself a one-of-a-kind player on the field, too, as a tireless worker who catches hundreds of balls off the Jugs machine after every practice. The Lions have described him as a quarterback-friendly target with sound technique and a high level of on-field awareness.

As featured on HBO’s annual training camp documentary, "Hard Knocks," St. Brown has derived plenty of motivation from his afterthought status as an NFL prospect. He cited on the show all 16 wide receivers who were drafted in front of him last year.

"I don’t forget things like that," St. Brown said. "I’m going to give every team hell."

That includes the Vikings, who host the Lions on Sunday. Minnesota made five picks in the 2021 draft before St. Brown went to Detroit with the 112th overall selection.

"I’m trying to take it up a notch. Everything I did last year, turn it up. More catches. More yards. More everything," St. Brown said. "More wins for the team."

The touchdown catch by St. Brown last season served as a microcosm of Minnesota’s deteriorated pass defense under Zimmer. The cornerback in coverage on that play was Cameron Dantzler Sr., who backpedaled too deep into the end zone to make it easy for Goff to find his target.

Dantzler was among the many Vikings defenders who were carved up last week in Philadelphia by quarterback Jalen Hurts in the 24-7 loss, and rookie Akayleb Evans took his place for much of the second half opposite veteran Patrick Peterson.

"We gave him a little rest there, but he’ll be back in there ready to go this week," defensive coordinator Ed Donatell said, confirming Dantzler was supposed to be deeper on the 53-yard touchdown catch in the second quarter when Quez Watkins blew by safety Camryn Bynum to give the Eagles a 14-0 lead.

"The correction has been made," Donatell said. "We trust him, and we know he’ll do fine."

ONE FOR THE SKIPPER

Five years after his NFL debut, Detroit’s Dan Skipper made his first career start against Washington. He played guard for the first time since he was a freshman at Arkansas, pressed into duty after the Lions lost three starters to injury: Frank Ragnow, Jonah Jackson and Halapoulivaati Vaitai. The 6-foot-9, 330-pound Skipper was celebrated by teammates and coaches, who chanted "Skip! Skip! Skip!" in the locker room. Skipper was emotional in his postgame news conference.

"I think I’ve had 20 NFL contracts," he said. "They’re not worth the paper they’re written on, right?"

The Lions have scored a touchdown in 15 straight quarters for the longest such streak in franchise history and the NFL’s longest active run. They have scored at least 35 points in the first two games of a season for the first time since 1970.

The Vikings quickly fell behind in Philadelphia, got out of their play-calling rhythm and had three turnovers in the second half — all interceptions thrown by Kirk Cousins. The only completions to Justin Jefferson were on short routes. Dalvin Cook had a career-low six carries for just 17 yards.

"We’ve got to be better on the field making those plays and just settling the game down. That’s just about being hard on each other, holding each other accountable and just going back to work, man," Cook said.