The Wolverines held the lead for the final 10 minutes and finished off the Wildcats in the final minute after seeing their late 10-point lead cut in half.

There were four ties and seven lead changes in the second half before an 8-0 run by the Wolverines gave them a 68-59 lead near the seven-minute mark. The Wildcats cut their deficit to five points at 72-67 on a Matthew Nicholson layup but Bufkin hit a 3-pointer and Tarris Reed followed with a layup for a 10-point Michigan lead with 2:29 to go. 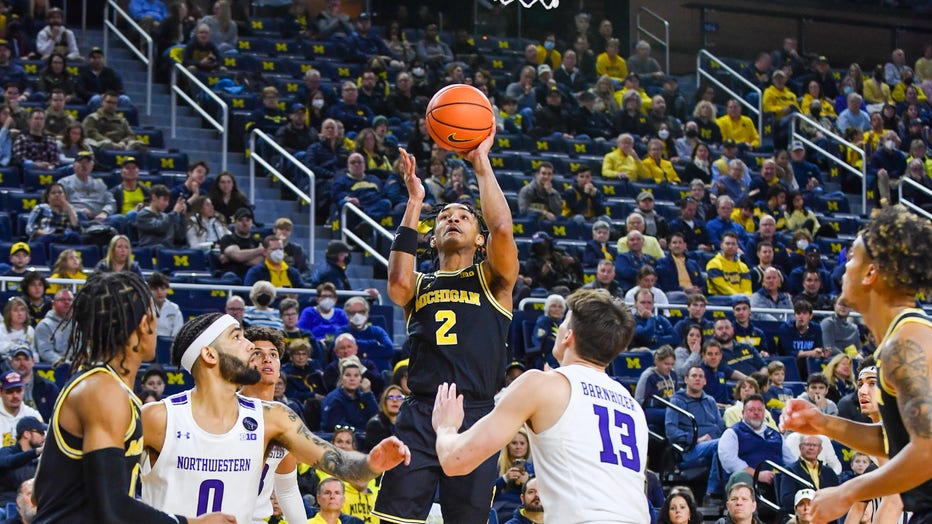 ANN ARBOR, MICHIGAN - JANUARY 15: Kobe Bufkin #2 of the Michigan Wolverines shoots the ball over Brooks Barnhizer #13 of the Northwestern Wildcats during the first half of a college basketball game at Crisler Arena on January 15, 2023 in Ann Arbor, M

Northwestern got within 79-74 on a layup by Boo Buie with 42 seconds left. Another layup by Buie made it 81-76 before a dunk by Bufkin gave Michigan a seven-point lead with 16 seconds to go.

Dug McDaniel added 17 points and five assists and Hunter Dickinson had 10 points and 15 rebounds for the Wolverines (10-7, 4-2 Big Ten).

The Wolverines shot 52% from the field and made 10 of 22 3-pointers but were slowed down by 18 turnovers, double their season average. Northwestern shot 42% and made only 6 of 23 3-pointers.

A layup from Joey Baker put Michigan up 20-8 midway through the first half but Northwestern rallied, tying the score at 27 when Chase Audige hit a 3-pointer with 5:39 remaining. Julian Roper's 3-pointer at 1:15 gave the Wildcats a 39-33 lead before Doug McDaniel scored the final four points of the half to get Michigan within 39-37 at the break.

It was Northwestern's first road loss of the season after wins over Georgetown, then-No. 20 Michigan State and then-No. 15 Indiana.

Northwestern plays at Iowa on Wednesday and Michigan will go to Maryland on Thursday.