CHARLOTTE, N.C. - Alec Burks scored a season-high 27 points off the bench, Killian Hayes added 25 and the Detroit Pistons spoiled LaMelo Ball’s return to the floor with a 141-134 overtime victory against the Charlotte Hornets on Wednesday night.

Burks had five points in overtime, including his fourth 3-pointer of the game with 1:47 left to put the Pistons up for good.

Bojan Bogdanovic had 24 points and Isaiah Stewart chipped in with 19 points and 11 rebounds for Detroit (8-22). Jalen Duren grabbed 18 rebounds as the Pistons snapped a three-game losing streak.

Kelly Oubre Jr. scored 28 points to lead the Hornets, while Terry Rozier added 25 despite shooting 2 of 13 from beyond the arc. 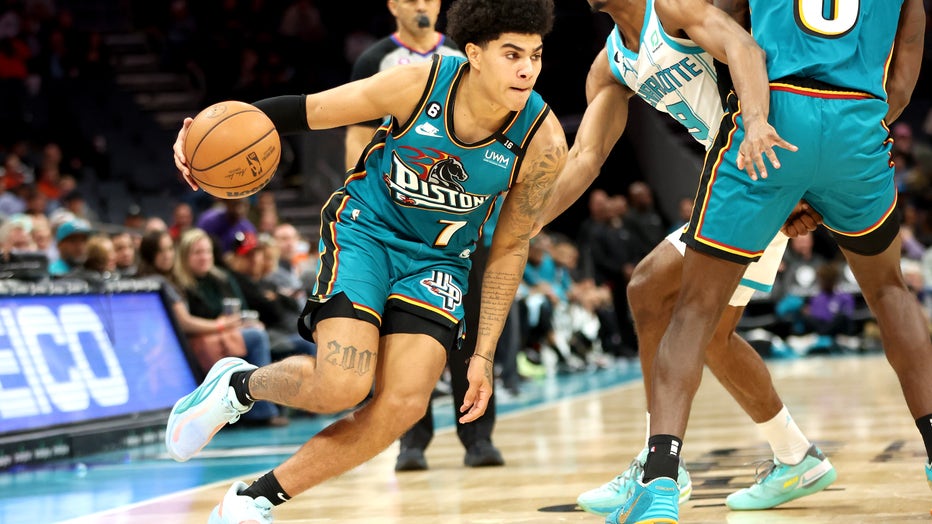 CHARLOTTE, NORTH CAROLINA - DECEMBER 14: Killian Hayes #7 of the Detroit Pistons drives to the basket during the second half against the Charlotte Hornets at Spectrum Center on December 14, 2022 in Charlotte, North Carolina. NOTE TO USER: User expres

Ball finished with 23 points on 9-of-18 shooting and 11 assists in his first game since Nov. 16 because of a sprained left ankle. But he fouled out with 29.6 seconds left in regulation, and his presence was missed in overtime as the Hornets were outscored 14-7.

Jalen McDaniels had 21 points for Charlotte.

But he began to heat up early in the fourth quarter, knocking down back-to-back 3s, including a fadeaway in the left corner, to trim Detroit's lead to five. Ball then drove the lane and dished to McDaniels up top for a 3-pointer to tie it with about 9 1/2 minutes to play.

Bogdanovic missed a fall-away jumper near the end of regulation with the game tied, and the Hornets got the rebound and called a timeout with 1.3 seconds left to set up a side inbounds play. Rozier's off-balance 3-pointer from the corner rattled around the rim and bounced out as the buzzer sounded, sending the game to overtime.

The Hornets honored former coach Paul Silas, who died Saturday, with a moment of silence and a video tribute before the game. The team is wearing a commemorative "Silas" patch on the left sleeve of its pullovers for the remainder of the season.

Silas spent eight seasons with the Hornets across two different stints with the franchise.

He's third in club history in games coached (401), games won (193) and winning percentage (.481), and is the all-time leader in each of those three categories for playoff games with an overall record of 11-12.

Hornets: McDaniels had a rather embarrassing moment when he received a backdoor bounce pass from Mason Plumlee and attempted a one-handed dunk, only to have the ball bounce off the rim and sail over the team's bench and out of bounds. ... The Hornets didn't commit a turnover until the 5:47 mark of the third quarter when Ball was called for traveling.