Those were career homers Nos. 496 and 497 for Cabrera. The veteran right-hander hit both long balls to the opposite field.

"For him to still be able to do that, it’s so impressive to me," Mize said. "He’s a sparkplug for our team." 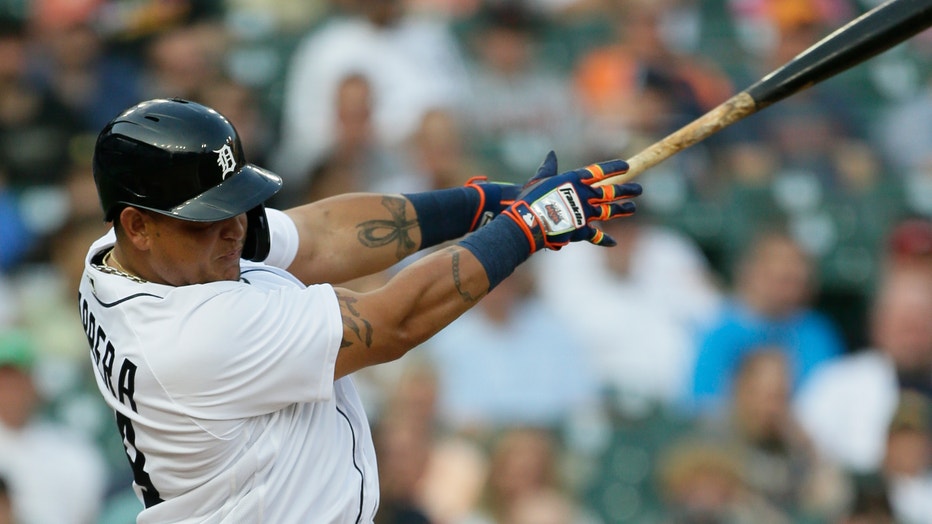 DETROIT, MI - JULY 29: Miguel Cabrera #24 of the Detroit Tigers hits his 2,937th hit during the first inning of a game against the Baltimore Orioles at Comerica Park on July 29, 2021, in Detroit, Michigan. (Photo by Duane Burleson/Getty Images)

Mize (6-5) held the Orioles scoreless until the seventh when they pushed across an unearned run, the only run he allowed. The rookie right-hander, the No. 1 overall draft pick three years ago, gave up four hits and struck out two in his first victory since June 26, though the Tigers had been limiting his innings since then.

With the Orioles freely swing the bat, Mize got through seven innings on 88 pitches, still the most he has thrown in the five starts since that previous win.

"I’m disappointed in our approach tonight a little bit," he said. "We were chasing balls in (and hitting) a lot of jam balls to the right side."

"Miggy was a huge contributor," Detroit manager AJ Hinch said. "Big day for him and ultimately a catalyst for us to come away with a win."

Detroit took a 2-0 lead in the first on Jonathan Schoop’s RBI single and a sacrifice fly by Haase, who added a two-out RBI single in the third.

Tigers: LHP Ian Krol, who was designated for assignment on Tuesday, cleared waivers and was outrighted to Triple-A Toledo.

Orioles: OF Anthony Santander (undisclosed), who cleared health and safety protocols Wednesday, worked out Thursday and could be activated during the four-game series. RHP Tyler Wells (left wrist tendinitis) is expected to throw a bullpen session this weekend.

Orioles RHP Matt Harvey (5-10, 6.65 ERA) will oppose Tigers LHP Tarik Skubal (6-9, 4.42 ERA) on Friday. Harvey has pitched six scoreless innings in each of his last two starts. Skubal has given up 22 home runs this season, including three to Kansas City in his last start on Sunday.