DETROIT - Miguel Cabrera is finding a way to help the Detroit Tigers while he waits for career homer No. 500.

Cabrera singled, flied out, was hit by a pitch and walked. The last two results drew loud boos from the crowd of 32,845, hoping to see the milestone homer.

With the game tied at 4, Bryan Shaw (5-6) walked Cabrera to start the eighth. Jacob Robson ran for him, and Jeimer Candelario and Renato Nunez singled to load the bases with no one out. 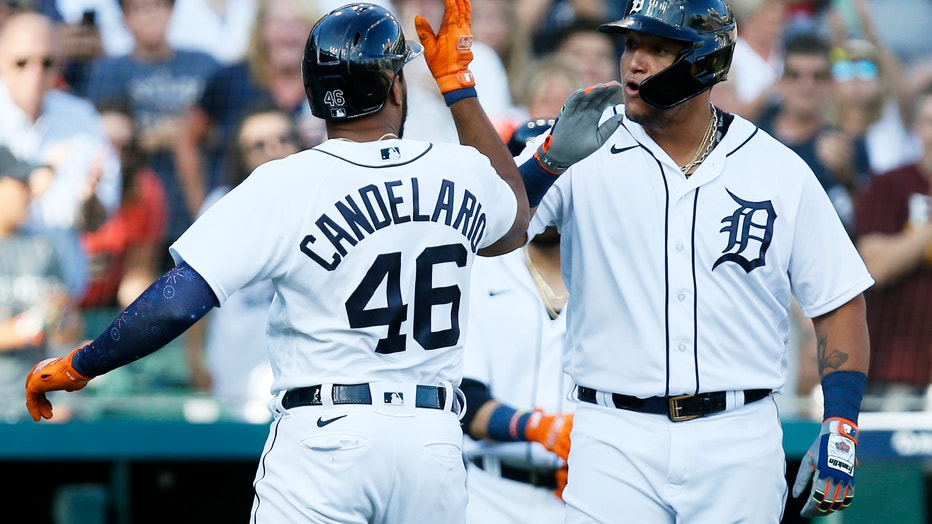 DETROIT, MI - AUGUST 14: Jeimer Candelario #46 of the Detroit Tigers celebrates with Miguel Cabrera #24 after hitting a two-run home run against the Cleveland Indians during the first inning at Comerica Park on August 14, 2021, in Detroit, Michigan.

Eric Haase followed with a bloop single over the drawn-in infield, putting the Tigers ahead 6-4. A wild pitch put runners on second and third, but Shaw struck out Willi Castro.

Alex Young replaced Shaw and got the final two outs.

Michael Fulmer (5-4) got three outs for the win. Gregory Soto pitched the ninth for his 15th save.

The Tigers scored twice in the first against Sam Hentges. Cabrera singled with two out and Candelario followed with his ninth homer.

Zack Short’s RBI single off Trevor Stephan lifted the Tigers to a 4-1 lead in the fourth, but the Indians rallied against Wily Peralta in the fifth.

José Ramírez hit an RBI triple with one out and scored on Franmil Reyes' single. Kyle Funkhouser came out of the bullpen and got out of the inning with the tying run on base.

The Indians tied it at 4 against José Cisnero in the seventh. Bradley Zimmer led off with a bunt single, took third on a Ramírez double and scored when Ramos grounded out.

Indians: Ace RHP Shane Bieber (strained rotator cuff) threw a 20-pitch bullpen session. It was the first time he had thrown off a mound since June 13.

The teams finish their weekend series on Sunday afternoon, with Cleveland’s Tristan McKenzie (1-5, 5.66 ERA) facing a Tigers opener to be determined.