ARLINGTON, Texas - Ezekiel Elliott ran for two 1-yard touchdowns and Dak Prescott threw for a score in his return from injury while the Dallas Cowboys leaned on their defense again in a 24-6 victory over the Detroit Lions on Sunday.

The Cowboys (5-2) recovered Jamaal Williams' fumble inside their 1 with a four-point lead early in the fourth quarter. Jared Goff was responsible for four other Detroit turnovers — he threw two interceptions and lost two fumbles.

Prescott was predictably ragged after missing five games with a fractured right thumb, and the offense struggled much as it did when Cooper Rush got a boost from the defense and went 4-1 as the star QB's replacement. 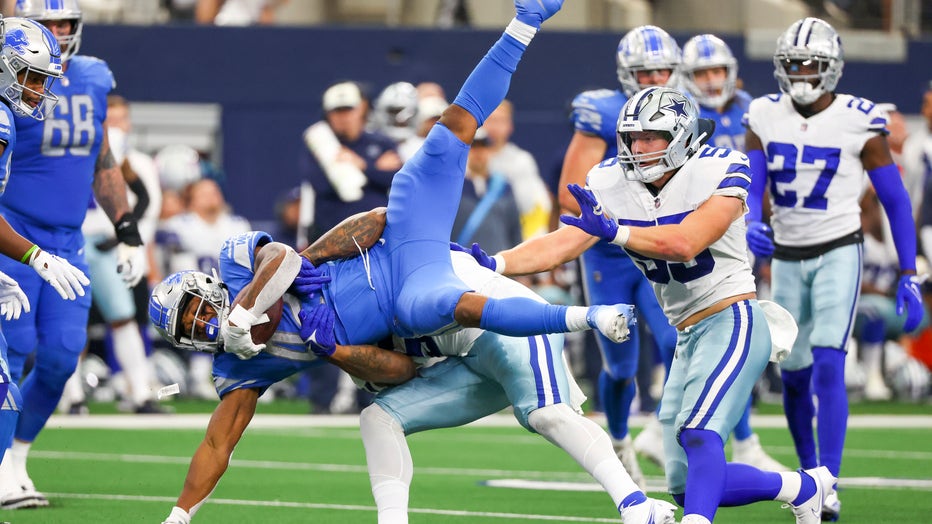 ARLINGTON, TEXAS - OCTOBER 23: Sam Williams #54 of the Dallas Cowboys tackles Justin Jackson #42 of the Detroit Lions during the second half at AT&amp;T Stadium on October 23, 2022 in Arlington, Texas. (Photo by Richard Rodriguez/Getty Images)

The Lions (1-5) got a solid showing for three quarters from the NFL's worst defense, but coach Dan Campbell fell to 0-11-1 on the road with the Lions in something of a homecoming for the Texas native.

Campbell's frustration showed when he threw his headset after Williams lost the ball in a pile and Anthony Barr recovered for Dallas with the Cowboys up 10-6.

Goff's first three turnovers led to the three Dallas touchdowns, starting with Trevon Diggs' third interception on a diving play inside the Dallas 20 with the Lions leading 6-3.

Dallas didn't have to go nearly as far after the next two turnovers from Goff.

Elliott's second TD came after Goff was intercepted by Jourdan Lewis at the Dallas 46.

Prescott threw a 2-yard scoring pass to rookie Peyton Hendershot after Goff lost the ball on one of two sacks by rookie Sam Williams, giving the Cowboys possession at the Detroit 24.

The first multi-TD game of the season for Elliott came after he took a hard shot on his right knee and was sidelined briefly in the first half.

Prescott was 19 of 25 for 207 yards, while Goff was 21 of 26 for 228 yards. Williams was effective with 79 yards on 15 carries, but had the critical mistake that kept the Lions from taking a fourth-quarter lead.

Detroit's Jack Fox averaged 48 yards on three punts a day after the announcement of a three-year contract extension. The deal has the highest average annual value for punters at $3.8 million, according to Spotrac.

Lions WR Amon-Ra St. Brown was ruled out by the concussion protocol after leaving the game following his only catch in the first quarter. ... RB De'Andre Swift missed his third consecutive game with ankle and shoulder injuries after the Lions were hopeful he could return. ... Cowboys T G Matt Farniok was ruled out in the second half with a hamstring injury.

Cowboys: Host Chicago next Sunday in the second of four consecutive matchups with NFC North teams.