DETROIT - The Detroit Tigers are suddenly playing like the relevant team they were expected to be after aggressively making moves in the offseason.

Daz Cameron hit a go-ahead, two-run homer in the eighth inning and the surging Tigers held on to beat the slumping Minnesota Twins 3-2 Thursday.

Cameron’s 416-foot shot to left-center off Emilio Pagan (1-2) scored Eric Haase, who hit a one-out single for the Tigers.

Detroit has won seven of its last nine games to make up some ground as the fourth-place team in the AL Central after a 14-28 start. 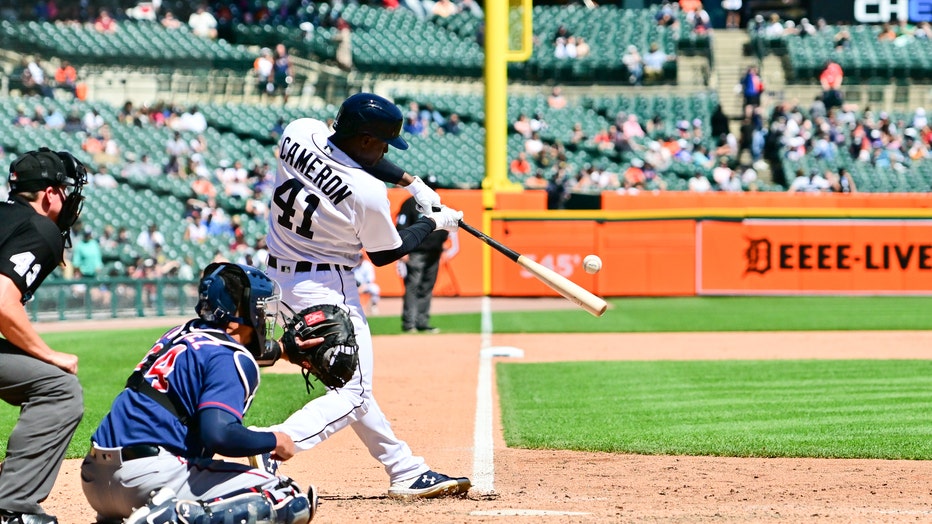 "This is what we expected to do this season because we have a ton of talent, and filled a lot of voids with a totally different team," Haase said. "We’re starting to find our stride and to do that with only one starting pitcher that we broke camp with is impressive."

Jonathan Schoop has had a lot to do with the Tigers’ turnaround, hitting an RBI single in the first inning of the series finale to account for seven of their 10 runs over two-plus games.

Cameron lifted Detroit to its fourth win in the five-game series against Minnesota by clearing the fences in spacious Comerica Park with a shot that even center fielder Byron Buxton seemed to know he had no chance to catch.

"When he stopped running, the center fielder for them, I knew it was gone," Detroit shortstop Harold Castro said.

Alex Lange (3-1) gave up two walks and struck out one in the pivotal eighth inning and Gregory Soto closed or his 10th save.

AL Central-leading Minnesota, the division’s only team with a winning record, has lost seven of 10.

"Every team goes through a stretch where the schedule gets tough," Pagan said. "Everybody is banged up. It seems like across the league, there’s a lot of injuries right now. We’re not the only ones going through it."

After getting shut out the previous two games, the Twins did finally score in Detroit.

Gio Urshela’s RBI double, which brought Nick Gordon home after he singled, in the third ended a 22-inning scoreless streak. Gordon hit a go-ahead double in the fourth inning, but the Twins could not keep a 2-1 advantage.

"We did a lot of things good," manager Rocco Baldelli said. "We’ve just got to expand the lead when we get it."

The Tigers gave SS Javier Baez a second straight day off to reset physically and mentally. Baez, who signed a six-year deal for $140 million deal in December, has his lowest batting average (.197) since he was a Chicago Cubs rookie in 2014 and has just three homers and 13 RBIs in 40 games.

Twins: RHP Sonny Gray, pulled from his last start, went on the 15-day injured list with a strained chest muscle. ... OF Gilberto Celestino, who went on the COVID-19 list last Friday, tested negative for two straight days and is expected to join the team for its upcoming series in Toronto.

Tigers: LHP Eduardo Rodriguez, on the IL with a rib sprain since May 22, will join the team on its upcoming road trip and expects to pitch for Triple-A Toledo within a week. ... OF Austin Meadows, on the IL with since May 16, has not had vertigo symptoms recently and feels great, according to manager A.J. Hinch.

Tigers: Hit the road for a three-game set with the New York Yankees on Friday night with Detroit RHP Elvin Rodriguez (0-0, 6.17) and New York RHP Gerrit Cole (4-1, 3.12) scheduled to pitch.