NEWARK, N.J. - Will Butcher scored the go-ahead goal in the third period, Blake Coleman scored two goals and Louis Domingue made 19 saves in his first start for New Jersey as the Devils beat Detroit 5-1, sending the Red Wings to a fifth straight loss on Saturday night.

Taro Hirose scored for the Red Wings, and Jonathan Bernier made 29 saves.

The game featured the two worst teams in the Eastern Conference. Both had only seven wins coming in. New Jersey started the night in 15th place with 18 points, one more than Detroit. 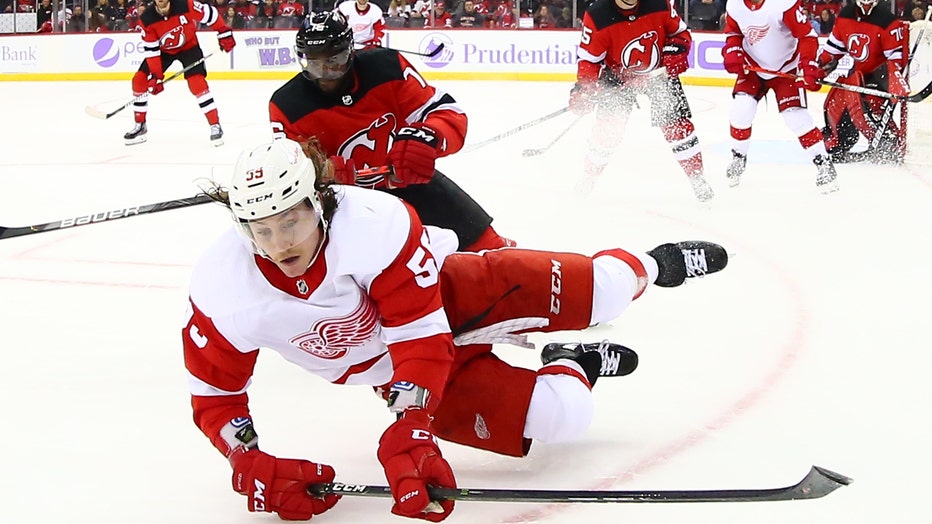 Domingue made his first start for the Devils following a Nov. 1 trade from the Lightning. He last started a game on March 21, winning 6-3 with Tampa Bay.

Domingue’s first appearance for the club was a week earlier, when he stopped all five shots in relief of Mackenzie Blackwood in a 4-1 loss at Pittsburgh.

Domingue immediately won over the Prudential Center crowd, squeezing the pads together to stop the first shot he faced, a drive from the right wing off the stick of Anthony Mantha.

He didn’t have much work the rest of the scoreless opening period as the Devils outshot the Red Wings 15-5.

The teams scored 26 seconds apart as the second period ended in a 1-1 deadlock.

Hirose opened the scoring at 3:32, deflecting a pass from Madison Bowey while cruising through the slot.

In the third, Butcher put New Jersey ahead 2-1 at 4:42 on a goal confirmed by video review. The officials on ice ruled that Palmieri kicked the puck into the net, negating the score. On review, it was determined the centering pass from Butcher glanced off the skate of Detroit defenseman Dylan McIlrath.

It gave the Devils their first lead of the game.

Coleman added an unassisted tally at 6:41.

Hall scored into an empty net at 15:23 as Bernier was already on the bench for an extra attacker.

NOTES: The Devils observed “Hockey Fights Cancer” night by wearing lavender warmup jerseys that will be auctioned off to raise funds for the Clara Maass Medical Center Infusion Center in Belleville. The Devils saluted 11-year-old brain cancer survivor Grace Eline, who joined the team as an honorary member this week. She dropped the puck for the ceremonial faceoff. ... Each team had a transaction Saturday involving ts AHL club. The Red Wings assigned D Joe Hicketts to Grand Rapids, while the Devils recalled LW Brett Seney from Binghamton. ... Bowey accomplished a rare feat late in the first period: picking up an interference penalty while not on the ice. Bowey had almost finished serving a minor for slashing. When the penalty box door opened, Bowey reached out and hooked a Devils player with his stick. That earned him 2 more minutes before he was back in the game. ... Mantha, Detroit’s leading scorer, left the game in the first period with an undisclosed injury. ... Wayne Simmonds of New Jersey and Detroit’s McIlrath fought in the final minute.