PHILADELPHIA - Joel Embiid had 22 points and 10 rebounds and the Philadelphia 76ers used a balanced scoring attack to extend their winning streak to six games with a 113-93 win over the Detroit Pistons on Wednesday night.

The Sixers' six-game winning streak is their longest since a seven-game run from Dec. 26-Jan 10 in the 2021-22 season. Philadelphia has won eight straight games at home after starting the season 5-5 in their own building. 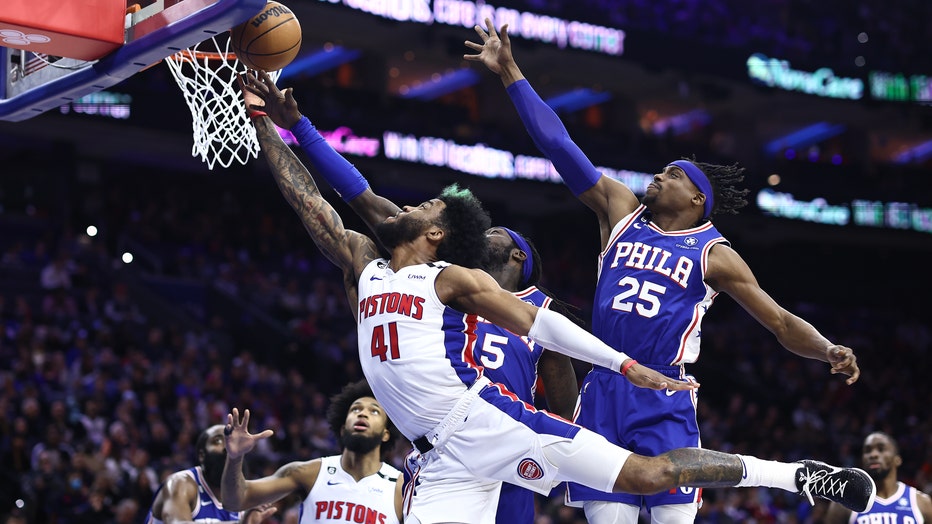 PHILADELPHIA, PENNSYLVANIA - DECEMBER 21: Saddiq Bey #41 of the Detroit Pistons shoots a lay up past Montrezl Harrell #5 of the Philadelphia 76ers during the third quarter at Wells Fargo Center on December 21, 2022 in Philadelphia, Pennsylvania. NOTE

Detroit was lead by Jaden Ivey, who followed up his career-best 30 points on Tuesday night with 16 points. Killian Hayes scored 12 and Saddiq Bey 11 for the Pistons, who have lost seven of their last eight games.

Philadelphia overcame some offensive struggles with defensive stinginess. The 76ers forced 22 turnovers and held the Pistons to 32.1% shooting from the floor in the third quarter. That allowed the Sixers to weather an offensive drought and maintain a double-digit lead.

Pistons: Hayes started for Detroit despite being labeled as a game-time decision with a left knee contusion. ... Detroit has lost nine straight at Wells Fargo Center, dating to March 4, 2017. ... Jalen Duren had his streak of seven straight games with 11 or more rebounds snapped. It was tied with Dwight Howard for the longest in NBA history by a rookie.

76ers: Furkan Korkmaz, who has missed the last two games with a non-COVID illness, returned to the Philadelphia bench and was available Wednesday night, playing late in the contest, when the game was secure. ... There is still no timeline on Tyrese Maxey's possible return. Maxey, the Sixers' No. 3 scorer from the guard position, has missed the last 15 games due to a fracture in his foot.

Pistons: At Atlanta on Friday night.

76ers: Wrap up seven-game homestand on Friday night versus the Clippers.