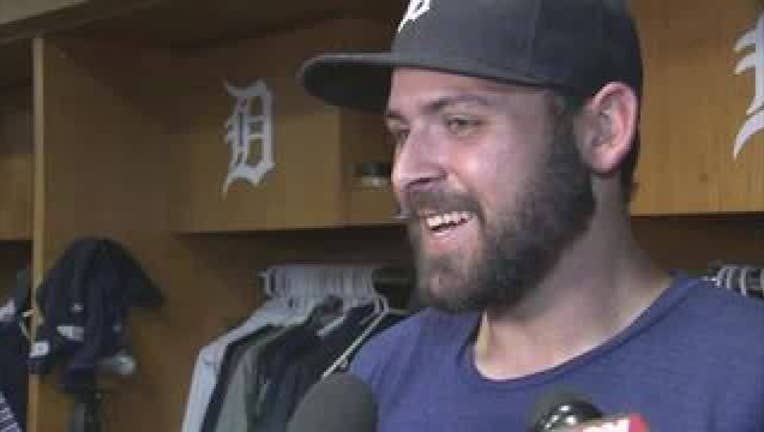 OAKLAND, Calif. (AP) - Michael Fulmer got some advice in the dugout from catcher James McCann after the second inning Friday night.

McCann told Fulmer to use a steady diet of changeups - prudent guidance for the 2016 AL Rookie of the Year.

Fulmer pitched eight innings of two-run ball after his start was pushed back a day due to rain, Jim Adduci hit a bases-loaded triple and the Detroit Tigers beat the Oakland Athletics 7-2.

"We leaned on it quite a bit," Fulmer said of the changeup. "We got quite a few ground balls. A few of them found holes, but I was happy with the way it kept them off balance. That's all Mac. He trusts it, so I trust it."

Fulmer (3-1) struck out nine and walked two after having his scheduled outing in Detroit rained out. Only one of the runs allowed by Fulmer was earned.

"Fulmer really set the pace for us," manager Brad Ausmus said. "His changeup was good today, he used that well. He pitched up with his fastball a number of times to get swings and misses. He just did an excellent job."

Yonder Alonso drove in two runs for the A's. Oakland has lost nine of 11.

The Tigers scored two runs in the third and three in the sixth to chase starter Andrew Triggs (4-2).

Adduci had the big blow with his triple in the sixth. He added a double and scored in the eighth.

"I think it was a good pitch but he did a nice job of keeping his hands in and shortening up," Triggs said. "Hat's off to him."

The 31-year-old journeyman, who spent the past two years playing in Korea and was called up from the minors on April 23 after JaCoby Jones was hit in the face by a pitch, also threw out Khris Davis trying to extend a single. The play was challenged by Oakland and upheld.

Cabrera added a running catch near the stands in foul territory while left fielder Justin Upton and second baseman Romine also made strong defensive plays for the Tigers.

Triggs gave up five runs and eight hits in 5 1/3 innings.

The A's paid tribute to their late longtime broadcaster Bill King when they unveiled a neon sign above the wall in center field bearing King's signature call of "Holy Toledo" in lights. The sign will flash every time Oakland makes a big play.

"Bill King was a huge part of my youth," A's manager Bob Melvin said. "His voice is just embedded in me and my youth. One of the greats of all time, if not the greatest."

Tigers: Jones resumed his rehab assignment with Triple-A Toledo. ... J.D. Martinez began a rehab assignment with Class A Lakeland, a sign that the veteran right fielder is making progress in his recovery from a right midfoot sprain. Martinez had been hitting in extended spring training for the past week. ... 2B Ian Kinsler (hamstring) remains day to day.

Athletics: An MRI taken on reliever Sean Doolittle's left shoulder revealed no structural damage. Doolittle was placed on the 10-day DL on April 30. ... Sean Manaea (strained left shoulder) is scheduled to throw a bullpen Saturday. ... Cesar Valdez was claimed off waivers by Toronto, two days the pitcher after being designated for assignment.

Tigers right-hander Jordan Zimmermann (3-1) makes his first career appearance at the Oakland Coliseum on Saturday night while the A's counter with RHP Jesse Hahn (1-2). Zimmerman's 6.18 ERA is nearly two points higher than any other Detroit starter. Hahn is unbeaten in three career starts against the Tigers.