CINCINNATI - Dustin Garneau hit a two-run homer and a solo shot, Robbie Grossman had a three-run blast, and the Detroit Tigers routed the struggling Cincinnati Reds 15-5 on Friday night.

Jonathan India and Eugenio Suárez homered for the Reds, who have lost five of six. Cincinnati's lead over St. Louis for the NL's second wild card is down to 1 1/2 games.

Garneau's first homer, a liner into the left-field seats, came during a six-run sixth inning in which Detroit had eight of its 18 hits.

Garneau, who had just one other long ball this season, got the first multihomer game of his career when he connected again the next inning. 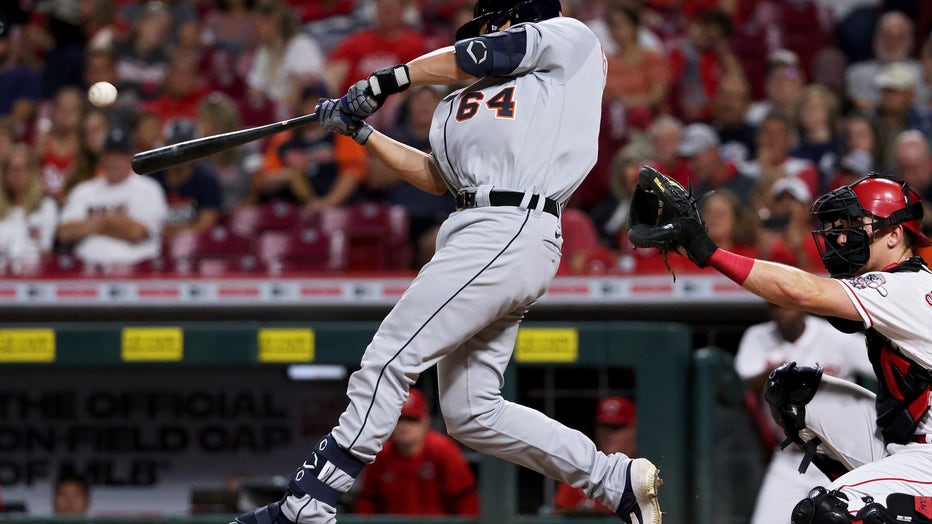 CINCINNATI, OHIO - SEPTEMBER 03: Dustin Garneau #64 of the Detroit Tigers hits a home run in the seventh inning against the Cincinnati Reds at Great American Ball Park on September 03, 2021 in Cincinnati, Ohio. (Photo by Dylan Buell/Getty Images)

Jonathan Schoop and Jeimer Candelario also homered for the Tigers, who won for just the second time in seven games. Each had four hits.

Harold Castro drove in two with a second-inning double for Detroit, which tied a season high with 15 runs.

"We had some really good at-bats, some good swings," Detroit manager A.J. Hinch said. "We hit the ball all over the ball park. I loved our aggressive style of play."

"They had a lot of opportunities that we were able to squash and come back and score the next inning," Hinch said. "That was huge."

Vladimir Gutierrez (9-6) allowed four hits and four runs through 3 1/3 innings and got the loss. The bullpen was worse, with Justin Wilson allowing three runs and three hits without recording an out, and Mychal Givens giving up the same while getting just one out.

Jeff Hoffman surrendered homers to Garneau and Grossman during a four-run Detroit seventh.

The 18 hits allowed by Reds pitching tied their season high.

Derek Holland (3-2) pitched a scoreless eighth and ninth to get the win.

Reds INF/OF Max Schrock was called in to pitch the ninth. He was the seventh Cincinnati pitcher and the only one not to allow a hit. He got the Tigers in order, striking out Schoop with a 59-mph curveball for the second out. Schrock, who had two hits and scored a run, was the first Reds position player to pitch since June 1.

Hinch is a big admirer of Reds first baseman Joey Votto, who is having a big year.

"I love how he interacts and engages with the fans, I love his rants on the umpires," Hinch said. "I love his eloquent answers when he’s interviewed. He’s one of the few players around the league, when I see that there has been an interview with him, I will click on it and listen to it from start to finish. He’s obviously a folk hero here in Cincinnati."

Reds OF Jesse Winker (intercostal strain) is about a week away from progressing to a rehab stint at Triple-A Louisville. "I think he could benefit from at least a couple games in Triple-A," Bell said. ... RHP Brad Brach (right shoulder) and RHP Art Warren (oblique strain) began rehab assignments at Louisville this week.

Tigers left-hander Matthew Boyd will be on the mound Saturday to face Reds right-hander Tyler Mahle. Boyd lasted four innings, allowing two runs and four hits in a loss to Toronto on Sunday. Mahle allowed four hits and two runs across seven innings but took the loss Sunday against Miami.