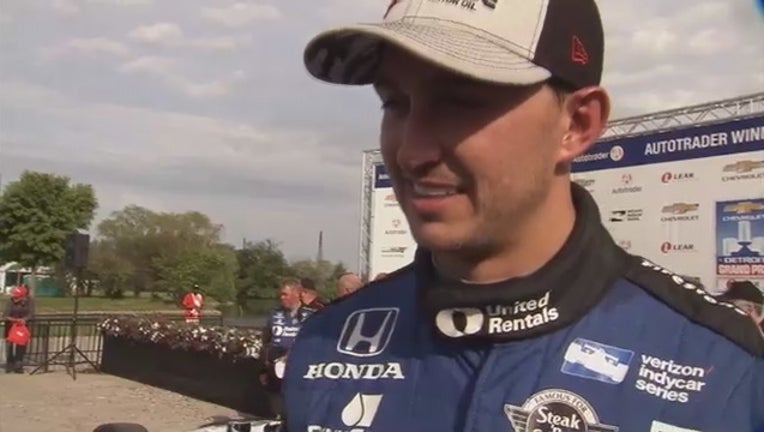 The Rahal Letterman Lanigan Racing driver pulled away for the victory after a single-file final restart with two laps to go in the 70-lap race on Belle Isle course.

A red flag stopped the race for 18 minutes after 67 laps because Spencer Pigot's car had a mechanical failure. The Ed Carpenter Racing driver got out of his smoke-filled car after a yellow flag came out because James Hinchcliffe's car stalled.

On Saturday, Rahal, from New Albany, Ohio, became the first American to win in Detroit since Michael Andretti in 1996. He has six career victories, five in two-plus seasons.

Will Power of Team Penske was third Sunday, giving Chevy a better showing than on Saturday when Honda swept the podium near General Motors' world headquarters.

Indianapolis 500 winner Takuma Sato earned the pole earlier in the day and finished fourth with his Honda-powered car for Andretti Autosport.

The open-wheel series shifts to Texas Motor Speedway, where Rahal is the defending champion, for a race under the lights Saturday night. Rahal beat James Hinchcliffe last year by eight-thousandths of a second in the closest finish for an IndyCar race at Texas.