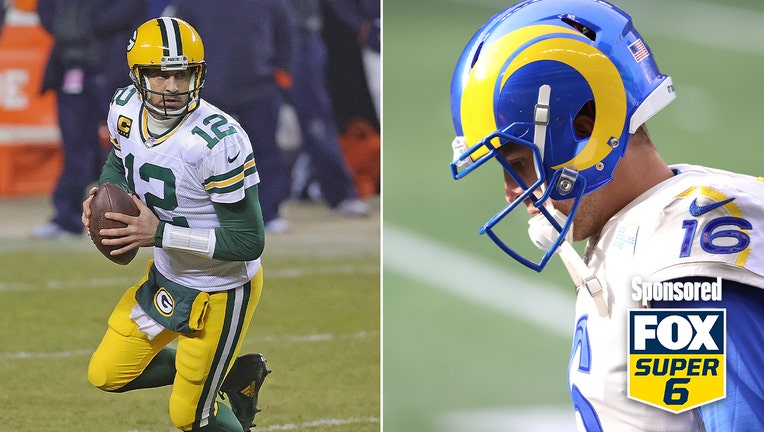 LEFT: Aaron Rodgers #12 of the Green Bay Packers rolls out to look for a receiver against the Chicago Bears at Soldier Field on January 03, 2021 in Chicago, Illinois. The Packers defeated the Bears 35-16. (Photo by Jonathan Daniel/Getty Images) RIGHT

And you could win that by playing FOX Bet’s Super 6 when the Los Angeles Rams visit Lambeau Field to take on the Green Bay Packers on Saturday (4:40 pm ET, FOX) in the NFC Divisional Playoffs.

Predict the right answers to the six questions on this game and you could win $250,000! It’s that simple.  Just download the FOX Super 6 free app to play you could win the grand prize to start the New Year right.

Could anything really be better than that? Here are the questions and how to look at it:

There are still questions about what Goff’s status could be for this game and whether the Rams would go back to John Wolford, who started last week in Seattle and who exited with a stinger. Still, Rodgers has always thrived not just in close games, but in the cold weather in Lambeau. One thing to keep in mind, however, is the Packers are becoming more of a balanced team in recent weeks. In other words, this could be a lower total than you would expect.

The same questions about the Rams passing game and the current situation with Goff and Wolford-- especially in the cold weather-- apply on this question as well. Also, Green Bay is a team that can play the swing pass game with Aaron Jones coming out of the backfield. Because of the amount of weapons that Rodgers has to use, it would be surprising to see the Rams win this category.

This is the flip side of the argument about the questions with the Rams passing attack. Cam Akers was huge last week for Los Angeles at Seattle, running for 131 yards and a touchdown. While Aaron Jones can also post a big rushing game, it is more likely that the Rams will try to use the running game to play keep away from Rodgers.

Fact: The Packers have actually been on the wrong end of this stat in two of their last three games. They still won those two games by an average of 14.5 points.  On the opposite side, the Rams have had more receiving yards in its last three games. Part of the reason for that could be the fact that the Los Angeles defense-- with Jalen Ramsey playing the premier corner- is a tough matchup.

Nsimba Webster has been the Rams' main punt returner and that shouldn’t change this week with Cooper Kupp battling bursitis. Meanwhile, the Packers are not a big punt return team – their longest this year coming in is 11 yards- and they mix up the return guys through the season.

Los Angeles has so many injury questions regarding Kupp, Aaron Donald and the quarterback position that it is a tall task to go back on the road two straight weeks to face a team that is rested. That being said, one thing the Rams have in their favor is defense can travel anywhere-- and nobody left in the field has a better defense than Los Angeles. Still, the Packers and Rodgers have played like a team on a mission. It’s tough to think that Green Bay loses in this spot – although it should be very close.