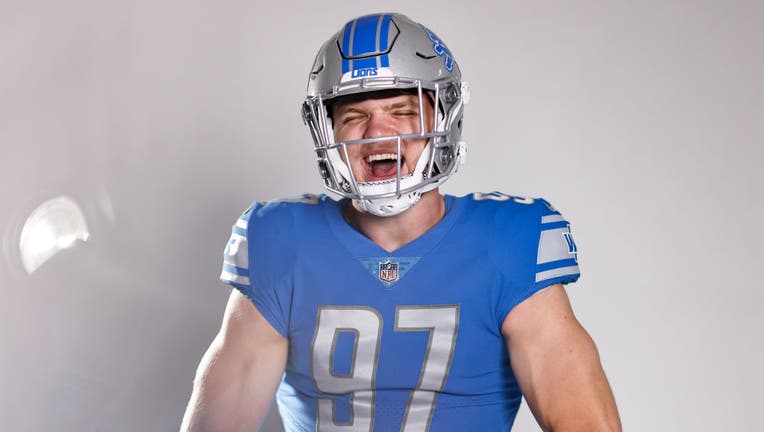 LOS ANGELES, CALIFORNIA - MAY 21: Aidan Hutchinson #97 of the Detroit Lions poses for a portrait during the NFLPA Rookie Premiere on May 21, 2022 in Los Angeles, California (Photo by Michael Owens/Getty Images)

DETROIT (FOX 2) - The Detroit Lions will open the 2022 preseason on Friday, Aug. 12 against the Atlanta Falcons. Here's everything you need to know to watch the game, listen to the game, and what to expect from the Lions this season.

Who: Detroit Lions vs. Atlanta Falcons

How to watch: In Detroit, you can watch the entire game on FOX 2. If you're outside the Detroit area, you can catch it on other stations throughout Michigan; You can stream it on the NFL app and NFL Network. NFL rules prohibit FOX 2 from streaming the game so, as much as we'd LOVE to stream the games here, we can't. Sorry.

Coverage for the game will start at 5:30 p.m. on FOX 2 with Lions Gameday Live! Dan Miller, Jennifer Hammond, and our other contributors will be live at Ford Field for a preview of the game. We'll talk about what to expect from the first preseason game, who to watch, and what this season could hold.

When the game ends, don't leave FOX 2. The game may be over but Dan, Hammer, and the rest of the crew are going to break down what we saw in our first glimpse of the 2022 Lions.

You can watch the pregame and postgame on the player here:

There's a lot of hope for the Lions to improve on the 3-win season from a year ago and bright lights will be on Deandre Swift at running back, rookie Aidan Hutchinson at defensive end, and quarterback Jared Goff.

How much will the Lions' starters play?

If you're expecting to see the starters play all 4 quarters, you must not have watch much preseason football.

Goff, Swift, Hutchinson, WR D.J. Chark, and the rest of the starters are virtually guaranteed to only play the first quarter - if that.

Instead, look at the backups. Behind Goff will be Tim Boyle and David Blough who will compete to be the team’s backup and perhaps seal a spot on the roster.

This offseason, the Lions made it a point to bring back Boyle and Blough on one-year deals after both shared reserve backup duties last season. It was Boyle who served as Goff’s primary backup in 2021, but this year the two have been splitting time with the second-team offense in training camp.

"I feel like they’re both better than they were in the spring," coach Dan Campbell said this week. "And I would just say it’s still somewhat early in camp and until we get in these preseason games, I think that will tell a lot for us."

After this game, the Lions have two more preseason games on tap.

On Saturday, Aug. 20 they'll be in Indianapolis to face the Colts at 1 p.m.