DETROIT - James' left elbow and hand appeared to make contact with Stewart above the neck,

Stewart, who was called for a foul before James hit him, was also ejected from the game early in the third quarter after being assessed two technical fouls for his role in the fray. James was called for a Flagrant 2 foul.

Lakers guard Russell Westbrook was assessed a technical after the officials reviewed the play and the fallout from it, determining he was an "escalator," while there was pushing, shoving and trash talking.

James was escorted off the floor and fans did not throw anything at him as he walked toward the team's locker room. 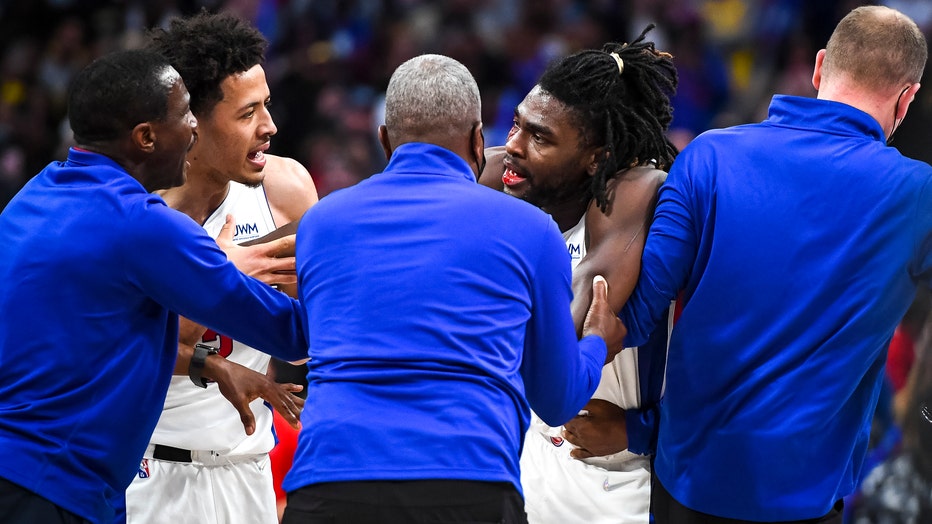 James and Stewart were not made available for comment after the game.

Anthony Davis of the Lakers praised players, coaches and security for keeping the peace.

"Everybody did a great job trying to deescalate the situation," Anthony said after the Lakers beat the Pistons 121-116. "You never want it to get to that point like 17 years ago."

Then, not far away, the scene was much different.

A cup was tossed from the stands in suburban Detroit on an infamous night on Nov. 19, 2004, triggering

Stewart's face was covered with blood after he and James were trying to get position for a rebound off a free throw. James appeared to attempt to apologize to Stewart as he lay on the court, but the 20-year-old center tried to charge toward the 36-year-old forward.

"Everyone in the league knows LeBron isn’t a dirty guy," Davis said. "As soon as he did it, he looked back and told him, 'My bad.'"

Stewart broke free more than once and appeared to be running into a tunnel that potentially provided a path toward to the Lakers' bench.

"I don’t think James is a dirty player, but Stew cut his eye," Detroit coach Dwane Casey said. "He felt like he had been cheap-shotted across the brow. I’m not even sure he knew who hit him."

Earlier this season, Stewart faced off with former teammate Blake Griffin of the Brooklyn Nets after they were tangled up during a game.

"He needs to just keep his head and not get a reputation," Casey said.