DETROIT - Jerami Grant had 31 points, 10 rebounds and a crucial assist near the end of regulation, and the Detroit Pistons beat the Phoenix Suns 110-105 in overtime after rallying from a 23-point deficit.

Detroit scored the first nine points of the extra session after barely leading at all during regulation. Grant had only two assists on the night, but one of them was to Mason Plumlee for a dunk that tied it at 93 with 9.6 seconds remaining in the fourth quarter. Then Devin Booker missed a jumper that could have won it for the Suns. 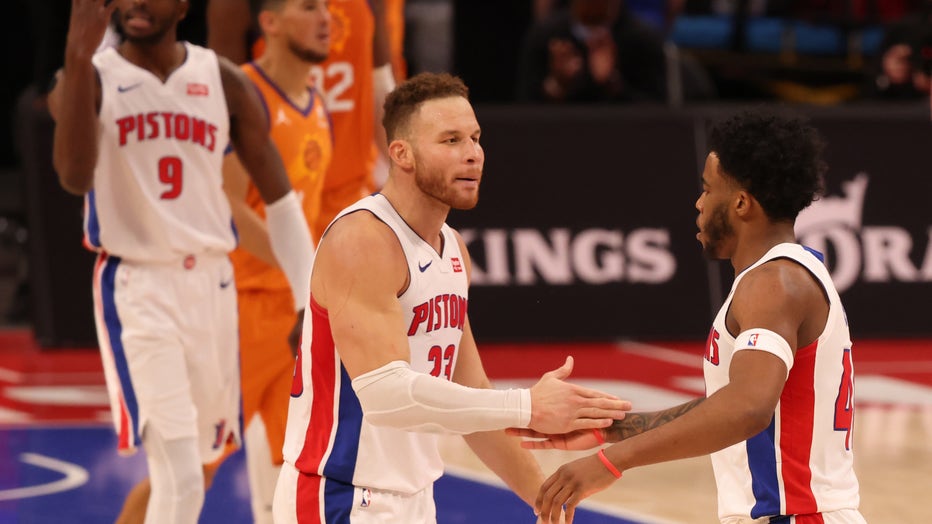 Booker scored 23 points for Phoenix, including a 3-pointer with 40.7 seconds left in overtime that brought the Suns within three. Grant answered with a 3-pointer in front of the Detroit bench to double the lead.

Phoenix entered the game with the best record in the Western Conference. Detroit came in with the worst mark in the NBA.

Utah shot 25 of 53 from 3-point range to snap a two-game skid after double-digit losses at Brooklyn and New York.

Jordan Clarkson had 23 of his 26 points off the bench in the first half. Bojan Bogdanovic and Royce O’Neale each scored 18, with O’Neale going 6 of 8 on 3-point attempts.

Giannis Antetokounmpo had 35 points and eight rebounds for the Bucks, while Khris Middleton had 31 points and 10 rebounds.

Miles Bridges scored 20 points and Devonte Graham had 17 for the Hornets, who didn’t take their first lead until the fourth quarter.

Zion Williamson scored 26 points and Josh Hart had 19 for the Pelicans, who’ve lost three straight, all at home.

The game marked the first time brothers Lonzo and LaMelo Ball played against one another. Charlotte's LaMelo Ball had the better night, with 12 points, 11 rebounds and nine assists.

MEMPHIS, Tenn. (AP) — Dillon Brooks scored 24 points and Memphis held on to beat Brooklyn after Grizzlies center Jonas Valanciunas left midway through the game due to health and safety protocols.

Brandon Clarke added 21 for Memphis, which got its first home win of the season.

The Nets got 43 points from Caris LeVert, including 25 in the second half as they overcame a 22-point, first-half deficit.

Brooklyn was without Kevin Durant and Kyrie Irving, while Memphis was missing reigning Rookie of the Year Ja Morant and forward Jaren Jackson Jr.

BOSTON (AP) — Jayson Tatum had 32 points, Jaylen Brown had 27 points and 13 rebounds, and Boston held off Bradley Beal and Washington for its fourth straight win.

Beal had 41 points and eight rebounds a game after tying the franchise record with 60 points against the 76ers.

Tatum hit 14 of 27 shots to power the Celtics, who were without Tristan Thompson, Grant Williams and Robert Williams because of COVID-19 protocols.

Rui Hachimura had 17 points for the Wizards.

Al Horford added 15 points and was practically the only offense early for the Thunder, who got better as the game went along and improved to 4-1 on the road.

RJ Barrett scored 19 points for the Knicks, who had their three-game winning streak snapped. Julius Randle, scoreless in the first half, finished with 18 points, 12 rebounds and seven assists.

Houston was up by 29 at halftime and had extended the lead to 81-43 after consecutive 3-pointers by John Wall and P.J. Tucker with about five minutes left in the third.

Nikola Vucevic had 22 points and 12 rebounds for the Magic. James Harden had 15 points and 13 assists for Houston.