DETROIT - Joey Wendle tripled and homered, 30-year-old Dietrich Enns won for the first time in the major leagues and the Tampa Bay Rays beat the Detroit Tigers 7-2 on Saturday.

"We all wanted to see this moment," Wendle said about Enns. "He hasn't always had the best luck, but he keeps going out there and he was electric tonight. We're thrilled for him."

"This was a really good performance across the board," Rays manager Kevin Cash said. "Joey crushed two balls — he would have had two homers in a lot of parks. KK picked up some extra bases, we drove guys in and we pitched well." 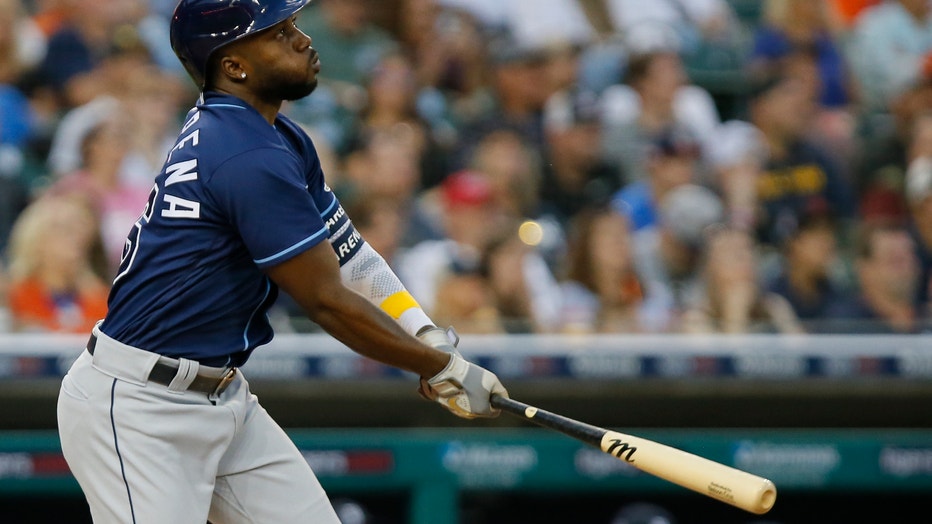 DETROIT, MI - SEPTEMBER 11: Randy Arozarena #56 of the Tampa Bay Rays hits a sacrifice fly ball to center field to drive in Nelson Cruz to score against the Detroit Tigers during the fifth inning at Comerica Park on September 11, 2021, in Detroit, Mi

Detroit's Miguel Cabrera picked up his 2,974th career hit with an RBI single in the fourth.

Enns (1-0) struck out six in four hitless innings of relief, nine years after being drafted by the New York Yankees out of Central Michigan University.

"That beer shower was really special," he said. "It made it even better to do it in Detroit. I didn't go to school far from here, so my parents and some of my college teammates got to see it."

Rays starter Chris Archer gave up one run on two hits before leaving after four innings with left hip discomfort.

"It's something he's dealt with all year," Rays manager Kevin Cash said. "It comes and goes. Tonight, he said after the fourth that it was bothering him. We'll get him worked on by the trainers."

Detroit's Casey Mize (7-8), who is on a pitch limit, allowed three runs in two innings.

Wendle tripled with one out in the second. Mike Zunino followed with a grounder to third and Wendle beat Jeimer Candelario's throw to the plate.

"(Wendle) ran inside the basepath, which is exactly what aggressive runners are taught to do, and he forced Jeimer to alter the throw," Tigers manager A.J. Hinch said. "We challenged the call, because he looked out with the naked eye, but they got it right."

Kiermaier followed with his second triple in as many games, giving the Rays a 2-0 lead.

After a walk, Brandon Lowe made it 3-0 with a sacrifice fly.

"I felt like they took control of the game right there and we really never got back into it," Hinch said. "We could have two out with a runner on first, but they end up with three runs."

Wendle led off the fourth with a home run, and Lowe made it 5-0 with an RBI single later in the inning.

"We did a lot of good things offensively tonight," Wendle said. "This was a nice win after a couple tough games."

Jonathan Schoop led off the bottom of the inning with a double — Detroit's first hit — and scored on Cabrera's line single to right, but Randy Azorarena's sacrifice fly restored Tampa Bay's five-run lead in the fifth.

Austin Meadows made it 7-1 in the ninth with Tampa Bay's third sacrifice fly before Robbie Grossman's homer in the bottom of the inning.

Enns got his first big-league win in his 203rd professional game, but just his eighth in the majors. He has pitched in the Yankees, Twins, Padres and Rays minor-league systems, spent a winter in Venezuela and pitched in the 2020 City of Champions Cup independent league.

"Dietrich is the story of the night," Cash said. "He stepped up when we needed him and we had quite a celebration for him after the game."