CHICAGO - Patrick Kane had a goal and an assist, and the Chicago Blackhawks beat the Detroit Red Wings 4-1 on Friday night for their first win of the season.

Andrew Shaw, Calvin de Haan and Mattias Janmark also scored for Chicago in its home opener after beginning the season with a four-game trip. Dylan Strome and Alex DeBrincat each had two assists. 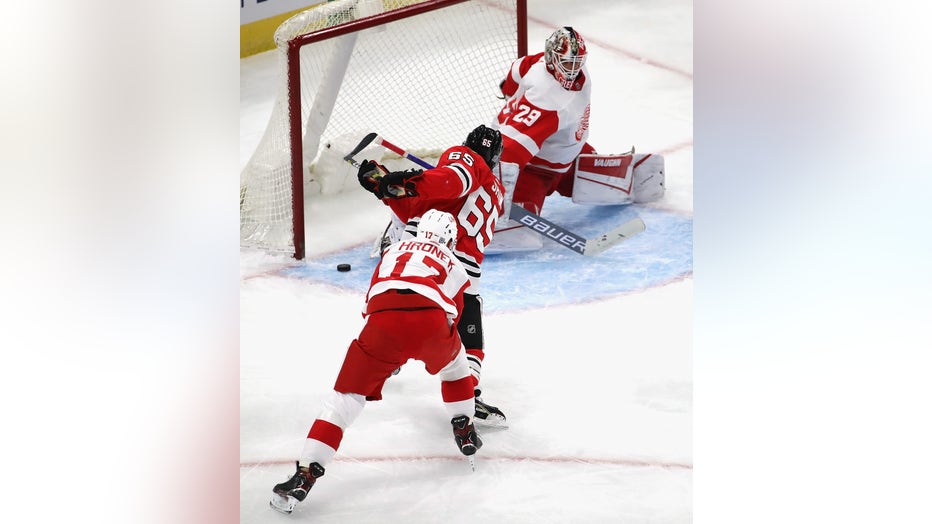 CHICAGO, ILLINOIS - JANUARY 22: Andrew Shaw #65 of the Chicago Blackhawks scores a goal against Thomas Greiss #29 of the Detroit Red Wings as he's pressured by Filip Hronek #17 at the United Center on January 22, 2021 in Chicago, Illinois. The Blackh

Kevin Lankinen, a 25-year-old rookie signed by Chicago as a free agent in 2018, stopped 30 shots in picking up his first NHL victory in his second straight start. Only Dylan Larkin, crossing the crease and getting Lankinen to commit, beat the Helsinki, Finland, native.

The Blackhawks (1-3-1) controlled the first period, withstood the Red Wings’ 12-5 shot advantage in the second, and held off a late surge by Detroit (2-3-0), which squandered five power plays.

Kane opened the scoring on a power play in the first period, posting his third goal in four games. He controlled Strome’s pass from left wing and flipped it past Thomas Greiss’ right shoulder before defenseman Alex Biega could check him. Greiss stopped 24 shots.

Strome also set up the Blackhawks’ second goal, feeding the puck from behind the goal line through three Red Wings to de Haan for a 50-foot slap shot past Greiss’ left arm 7:58 into the second.

Shaw turned Kane’s pass into the slot into the third Chicago goal on a power play 6:17 into the third.Larkin raced in on right wing 12:22 into the third, sped by Lankinen, and flipped the puck over the goalie for Detroit’s only goal. Mattias Janmark added a late open-net goal for Chicago while the Blackhawks were shorthanded.

Lankinen, signed by Chicago as a free agent in 2018, allowed five goals in his first NHL start, Tuesday’s 5-4 overtime loss at Florida. The Blackhawks had allowed five goals in each of their first four games, with Malcolm Subban in net for the opener at Tampa Bay and Collin Delia playing next two games.

The usual enthusiastic roar of the Chicago crowd behind national anthem singer Jim Cornelison was missing on Friday night, replaced by an empty building and recorded fan noise. Cornelison himself was on tape rather than live. Instead of the usual 20,000-plus, there were no more than 80 onlookers, including reporters, television personnel, game operations personnel, Chicago and Detroit executives, and scouts from other teams in United Center.

The Blackhawks and Red Wings play again on Sunday morning in Chicago, the second of eight meetings this season.