DETROIT - Dylan Larkin scored the game-winning goal in overtime — his second goal of the night — to give the Detroit Red Wings a 3-2 win over the Montreal Canadiens.

Larkin took a puck coming off the boards from Lucas Raymond, who was credited with an assist, and scored top shelf to goalie Sam Montembeault’s stick side. It was his seventh of the season, and gave him 300 career points.

Montreal saw goals from Ryan Poehling and Chris Wideman. Goalie Jake Allen had eight saves before he was knocked out of the game late in the first period because of a collision with Larkin. Sam Montembeault took over and made 22 saves.

Poehling struck first at 4:39 of the first period, but Larkin and Pius Suter erased the deficit with goals that were less than a minute apart. 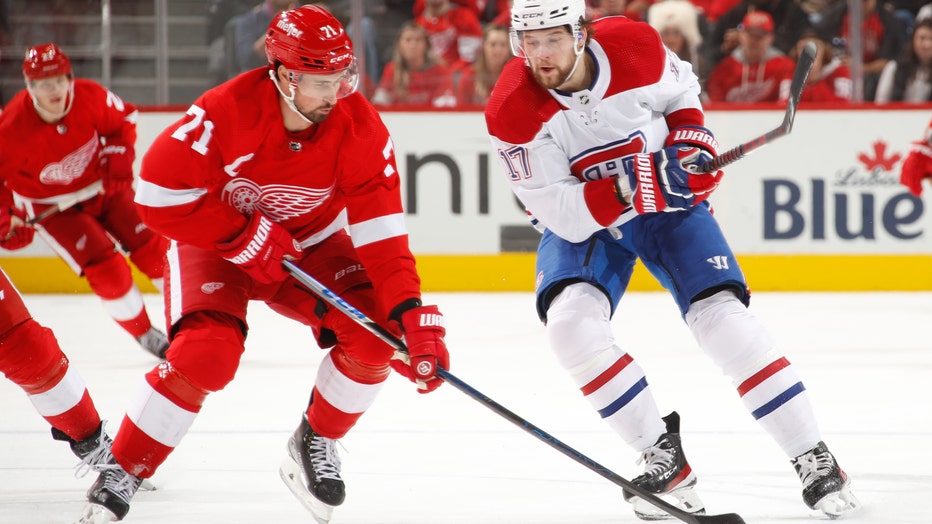 DETROIT, MI - NOVEMBER 13: Josh Anderson #17 of the Montreal Canadiens and Dylan Larkin #71 of the Detroit Red Wings battle for the puck during the second period of an NHL game at Little Caesars Arena on November 13, 2021 in Detroit, Michigan. (Photo

Larkin scored on a shot from the left corner despite having very little net to shoot at from an angle but found the upper right corner.

The Canadiens tied it up at 2 at 2:33 of the third period on Wideman's second goal of the season. Left wing Artturi Lehkonen fed Wideman with a no-look, back-handed pass that went through the legs of Detroit defenseman Mark Staal.

Detroit fans tossing an octopus onto the ice is a tradition generally associated with the Stanley Cup playoffs. However, one fan was so moved by Larkin’s first goal that he flung the cephalopod over the glass, necessitating a brief delay to remove it.

Canadiens: Allen left the game with 57.3 seconds remaining in the first period after absorbing a hit from Larkin, who lost his balance while cruising in on goal with defenseman Jeff Petry playing him tightly. Larkin also dislodged the goal pipes and net during the high-impact collision.

Larkin appeared shaken up and sat out the rest of the period on the bench before returning for the second period and scoring the game-tying goal.

The Canadiens are thin at goalie position. They haven’t yet had the services of netminder Carey Price, who helped lead them to the 2021 Stanley Cup finals. Price five weeks ago voluntarily entered the NHL’s player assistance program -- jointly run by the league and the NHL Players’ Association to help players and their families with mental health, substance abuse and other matters. Price returned to the team last weekend after satisfying the program’s 30-day minimum, but no date has been set for him to resume game action.

Red Wings: Mitchell Stephens, a fourth-line center with four assists, left the game with what a team spokesman described as a lower body injury and did not return.