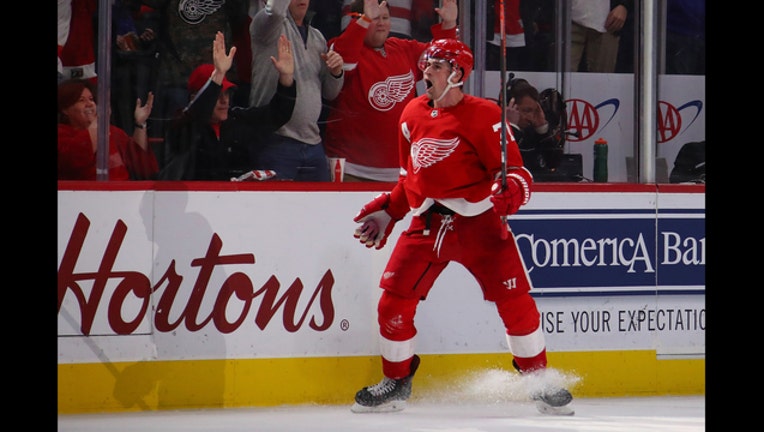 Larkin scored with 24.9 seconds left in overtime as Detroit rallied from a two goal-deficit to defeat the Nashville Predators 4-3 Friday night and snap a six-game winless (0-4-2) skid.

"For us to play that way, especially going down 1-0 (actually 2-0, early in the second period), it speaks a lot to the guys in our room and the preparation we had going into tonight," Larkin said.

Larkin, who has points in 15 of his last 16 games (8-11-19) beat Nashville goaltender Pekka Rinne with a backhander from the slot as he cut in from the left point. It was Larkin's 18th goal.

"I just saw daylight and felt like a running back and went to the net," Larkin said. "And I saw a defenseman going down on one knee and I shot it before I got to him and I think it caught Rinne off-guard."

It was his fourth OT winner of the season.

"We were awful from start to finish. We lost every 50-50 puck battle, and Pekka was the only reason we got a point," Predators coach Peter Laviolette said. "We had three or four guys who came willing to work and 15 that didn't, and that's never going to work in this league."

Johansen tied it 3-3 with 1:16 left in regulation and Rinne pulled for the extra attacker. Johansen's eighth goal of the season came on a shot from the left circle.

Bertuzzi gave the Red Wings a 3-2 lead with 8:03 left in the third period. He tapped in a backhand goal-mouth pass from Gustav Nyquist after a turnover by Subban deep in his own zone. It was Bertuzzi's 10th goal.

Athanasiou put the Red Wings on the board 4:24 into the second with his 15th goal.

It appeared that defenseman Anthony Bitetto had given Nashville a 3-2 lead with 5:15 left in the second period. But Detroit challenged goaltender interference and the goal was overturned.

Subban gave Nashville a 1-0 lead with 2:24 left in the first period with his third goal.

The Predators did not get their first shot of the game until less than seven minutes remained in the opening period. The Red Wings had 10 shots at that point.

NOTES: Detroit RW Anthony Mantha returned after missing 15 games with a broken hand. ... Vanek was saluted during a stoppage of play in the first period. ... LW Phillip Di Giuseppe made his Nashville debut after being claimed on waivers from Carolina on Tuesday.