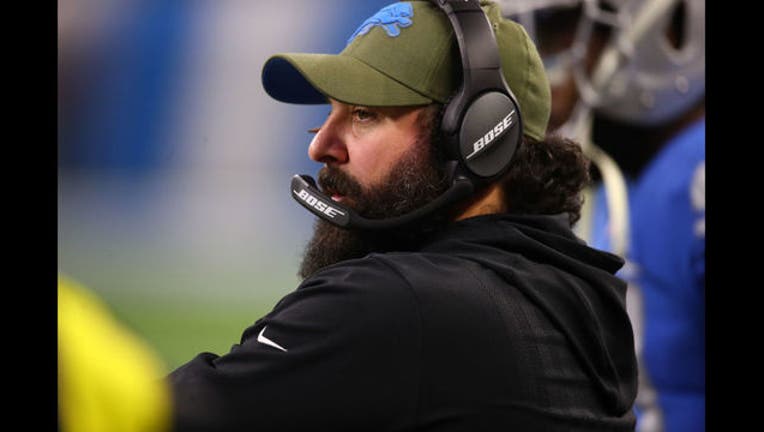 DETROIT, MI - DECEMBER 23: Head coach Matt Patricia of the Detroit Lions looks on in the first quarter of the game against the Minnesota Vikings at Ford Field on December 23, 2018 in Detroit, Michigan. (Photo by Gregory Shamus/Getty Images)

DETROIT (AP) - The collapse of the Detroit Lions is essentially complete.

There's still one more game to go, but the Lions are now assured of their first last-place finish since 2012 after a 27-9 loss to the Minnesota Vikings on Sunday. Detroit actually dominated the first 25 minutes or so, but the Lions allowed Minnesota's Kyle Rudolph to catch a Hail Mary touchdown with embarrassing ease with no time remaining in the first half.

That play put Detroit behind for good.

"Each game is different. That's part of the frustrating part," Lions quarterback Matthew Stafford said. "It's not one thing, you say, 'OK, let's go fix that and we'll be fine.' It's just, it's tough to win games in the National Football League and for one reason or another, execution and playmaking, we haven't done enough of it."

Detroit (5-10) will end up in the NFC North cellar for the first time since going 4-12 in 2012 under Jim Schwartz. The Lions fired coach Jim Caldwell after going 9-7 last season, and in the first year under Matt Patricia, they will end up with a worse record than in any of Caldwell's four seasons in Detroit.

One of the low points of Caldwell's tenure came in 2015, when Aaron Rodgers threw a 61-yard touchdown pass to Richard Rodgers with no time remaining to give Green Bay a 27-23 win over the Lions. Detroit seemed ill prepared for that play, and the defense wasn't much better Sunday when Minnesota tried it.

"We just have to get a little bit better from an alignment standpoint, we have to get some of those guys in better position," Patricia said. "Get the guy who caught the ball boxed out and get him out of there. So, a couple details there."

Aside from that Hail Mary, it wasn't a bad performance by the Lions on defense. They held Minnesota (8-6-1) without a first down for the whole first quarter, and Detroit was up 9-0 in the second.

The game turned when the Lions left Adam Thielen all alone on third-and-17, and Kirk Cousins found him for a 40-yard gain. That set up a touchdown with 1:32 left in the half.

Minnesota got the ball back, and the Vikings made it to the Detroit 44 with 2 seconds left. Cousins had plenty of time to throw to the end zone, and Rudolph made the catch without even falling down.

Detroit managed only 74 total yards in the second half. The offense was without rookie running back Kerryon Johnson and receiver Marvin Jones, both on injured reserve.

The Lions dropped their opener at home to the New York Jets, 48-17 back in September. Their home finale Sunday was similar.

"We just have to be better as a team and even next year, it's not going to get any easier," defensive lineman Ricky Jean Francois said. "We're going to keep playing playoff teams, now you have to figure out how to beat playoff teams. Don't even look at the season, just look at playoff teams."