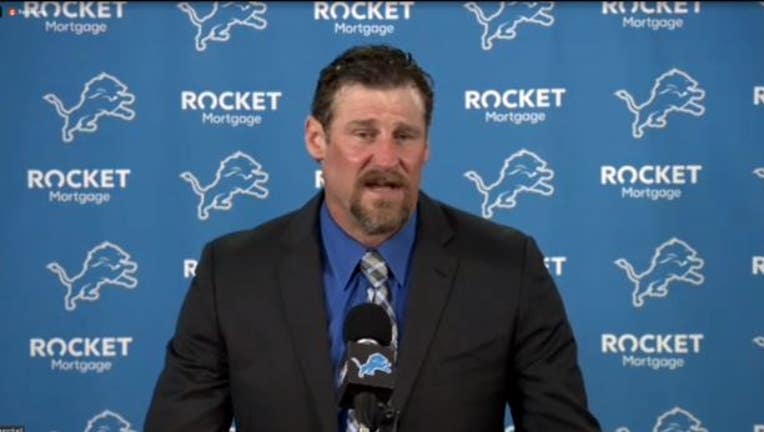 The Lions announced the hiring on Wednesday, which by that point had become a foregone conclusion once Campbell's previous team, the New Orleans Saints, were eliminated from the playoffs.

Dan Miller sat down with new Lions Head Coach Dan Campbell on Thursday to talk about how he feels coming back to Detroit, his desire to build a winner, and more.

Campbell brought a lot of energy to Thursday's introductory press conference and promised that the Lions would represent the blue-collar nature of the city.

"I can't guarantee wins, but my job is to get this city back on its feet...this team is going to freakin' take on your identity," he said.

Campbell said he drinks a gallon of coffee each day. That explains the energy.

He says his game planning is all about exploiting weakness.

"We're gonna run a system that puts our best on your worst."

The Lions are hoping they've found a long-term coach in Campbell and NFL Network reporter Ian Rapaport said they signed him to a six-year contract.

"This is an exciting day for our organization as we introduce Dan Campbell as the new head coach of the Detroit Lions. With more than 20 years of experience as both a coach and player in the National Football League, Dan knows the rigors of professional football and what it takes to be successful. He will help promote the culture we want to establish across our organization, while also bringing with him high energy, a respect for the game and an identity with which everyone can align themselves," said Lions owner Sheila Ford Hamp on Tuesday.

Lions fans, players, and the organization will all look to Campbell to turn around a franchise that has been searching for a playoff victory for decades. The last coach to win a playoff game in Detroit was Wayne Fontes in 1991.

One of the biggest questions Campbell will face is what will happen to Matthew Stafford. The Lions quarterback will be 33 this fall and has spent every year of his 11-year career in Detroit and has racked up multiple NFL records along the way including youngest to throw five touchdowns in a single game, first player to complete 60% or more of all passes in a single season, and fastest player to reach 40,000 career passing yards.

Campbell was asked if Stafford is in the plans for the new staff.

"He's a stud. He's one of the toughest quarterbacks you'll ever see. I know he's a team guy and I know he wants to win. I'll leave it at that," Campbell said.

Campbell replaces Matt Patricia, who was fired in November after failing to turn the franchise around in less than three years. Patricia, the former defensive coordinator for the New England Patriots, finished his Lions head coaching tenure with a 13-29-21 record and a last-place finish in the NFC North every year.

The 44-year-old Campbell has coached 12 games as a head coach, when he was the interim head coach for the Miami Dolphins in 2015, finishing with a 5-7 record. He was not retained following the season and went to New Orleans where he has been for the past five years under head coach Sean Payton.