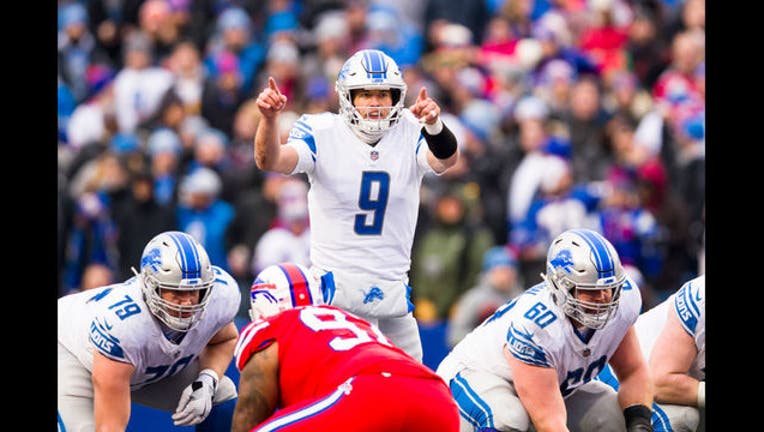 ORCHARD PARK, NY - DECEMBER 16: Matthew Stafford #9 of the Detroit Lions instructs his teammates from the line of scrimmage during the second half against the Buffalo Bills at New Era Field on December 16, 2018. (Photo by Brett Carlsen/Getty Images)

ORCHARD PARK, N.Y. (AP) - Matt Patricia had no time to reflect on missing the playoffs for just the second time during 15 NFL seasons.

For one, this isn't New England, where the rookie Detroit Lions coach spent his first 14 seasons as an assistant. And, Patricia said, there are still two games left for the Lions to play.

"I'm not going to put anything into summation," Patricia said after a 14-13 loss to the Buffalo Bills on Sunday mathematically eliminated the Lions from contention.

"I think we're going to be focused on this game and trying to make sure to analyze this game and where we can get better," he added. "There's a lot of areas that we can work on."

The Lions fell to 5-9 and will miss the playoffs for a second consecutive season, while also guaranteed a losing record for the first time since a 7-9 finish in 2015.

The result was indicative of an injury-depleted roster and a team in transition. Leading rusher Kerryon Johnson missed his fourth straight game with a knee injury. Detroit was also dealing with a patchwork group of receivers with Marvin Jones on injured reserve, Bruce Ellington out with a hamstring injury and Golden Tate traded to Philadelphia in October.

Though Kenny Golladay had a career-best 146 yards receiving, Detroit punted on six of its final possessions in squandering a 13-7 lead in the fourth quarter.

Bills rookie Josh Allen hit undrafted rookie receiver Robert Foster for a 42-yard touchdown with 10:26 remaining. And Allen sealed the victory by leaping for a 2-yard gain to convert a fourth-and-1 at Detroit's 41 with 1:47 left.

And the Lions' usually reliable special teams also cost them.

"Awful. I didn't do my job right," Muhlbach said, noting he had difficulty raising the ball off the ground. "I let everybody down."

Then, following Foster's touchdown, Stafford responded by marching the Lions 45 yards on the next possession only to have kicker Matt Prater miss a 48-yard field goal wide right.

"I don't have an excuse," said Prater, who entered having hit his previous 14 field-goal attempts. "You want to come through and make plays for your team when you get the opportunity. And it's frustrating not to."

Patricia said there was plenty of blame to go around.

"There's plenty of situations out there on the field where we could do more to do better to help us win," Patricia said. "It starts with me. Have to go out and execute better."

Though Stafford finished 22 of 29 for 208 yards passing and a touchdown, the Lions' offense all but dried up in the second half. Detroit managed just 117 yards offense and five first downs over the final two quarters.

That was particularly apparent on what proved to be Detroit's final possession. The Lions gained just 2 yards in going three-and-out in punting from their own 33 with 2:56 left.

"We had our chances and opportunities and just didn't make enough plays as a team," Stafford said.

"Yeah, it's frustrating. You play this game for the opportunity for the playoffs and a chance to win the whole thing," he added. "So any time that gets taken away from you, it's disappointing."