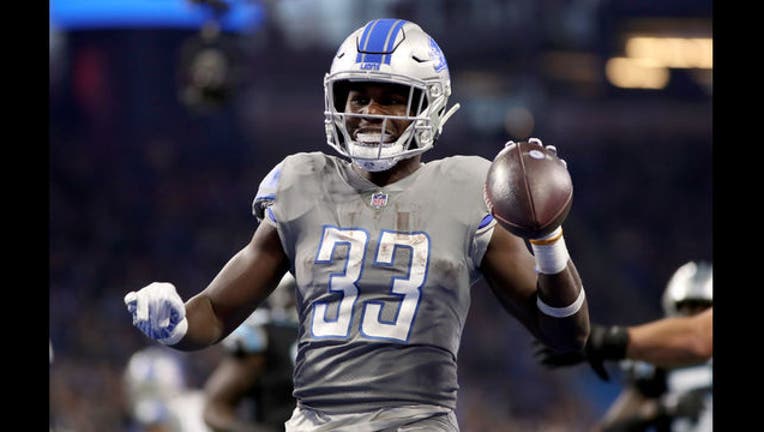 DETROIT, MI - NOVEMBER 18: Detroit Lions running back Kerryon Johnson #33 celebrates his touchdown against the Carolina Panthers during the first quarter at Ford Field on November 18, 2018 in Detroit, Michigan. (Photo by Gregory Shamus/Getty Images)

Detroit also activated returner Jamal Agnew from IR on Wednesday. Agnew has been out since Week 5 because of a knee injury. The Lions host Minnesota on Sunday.

Johnson ran for 641 yards and three scores before his injury last month. He also had 32 receptions for 213 yards and a score. Johnson ran for a season-high 158 yards in a win at Miami and had 101 yards rushing in a victory over New England.

"We have to keep the run game going like we've been doing since Kerryon got hurt," coach Matt Patricia said. "Kerryon, obviously, was great when he was out there and it's part of the season of growing and learning as a young player, but right now it's all about the Vikings for us and the players that we have."

Johnson, a second-round draft pick from Auburn, has rushed for more yards this season than any Detroit player since 2014 - despite playing in only 10 games.

Detroit added depth at running back by signing running back Justin Stockton to the practice squad and cutting guard Salesi Uhatafe from it.

Agnew's return could help. He was an All-Pro last season as a rookie after returning two punts for touchdowns. He also plays cornerback.

"He's someone that works really hard and has really done everything we've asked to push through his situation," Patricia said. "I think in the beginning part of the year and really through the spring, there was a lot of growth and a lot of development there, not only in special teams but on defense, which was great to see."