Kris Letang had a goal and two assists for the playoff-bound Penguins, who won for the third time in four games. Sidney Crosby, Rickard Rakell and Chad Ruhwedel each finished with a goal and an assist.

"Our success comes when everybody’s kind of pulling the same direction," Letang said. "Sid attracts so many eyes on the ice that leaves other players with a lot more time." 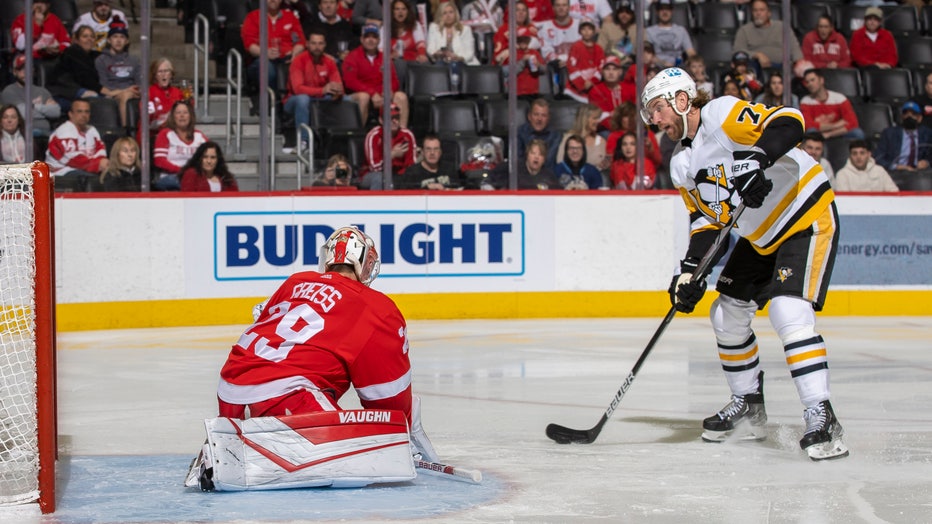 DETROIT, MI - APRIL 23: Thomas Greiss #29 of the Detroit Red Wings makes a save on Jeff Carter #77 of the Pittsburgh Penguins during the second period of an NHL game at Little Caesars Arena on April 23, 2022 in Detroit, Michigan. (Photo by Dave Regin

Detroit trailed 2-0 after Crosby scored his 30th goal of the season with 4:42 left in the first. But Vrana responded with a power-play goal, and Rasmussen tied it with his 13th just 17 seconds into the second.

That’s when Pittsburgh took over.

Rakell, who was acquired in a February trade with Anaheim, put the Penguins ahead to stay with his 20th goal 7:44 into the second. Rakell has four goals and nine assists in 16 games with his new team.

"Rak’s goal was huge," Penguins coach Mike Sullivan said. "We just went back to work. I think when you can respond and score a goal, it just settles things down, and we got better as the game went on."

The Penguins kept up their play in the third. Danton Heinen scored his 18th goal at 5:38, and Malkin closed it out with his 19th in the final minute.

"I thought we were a little bit flat there in the second half of the game," Red Wings defenseman Danny DeKeyser said. "They’ve got so many guys that can put the puck in the net that eventually, it’s going to cost you."

Penguins: At Philadelphia on Sunday.