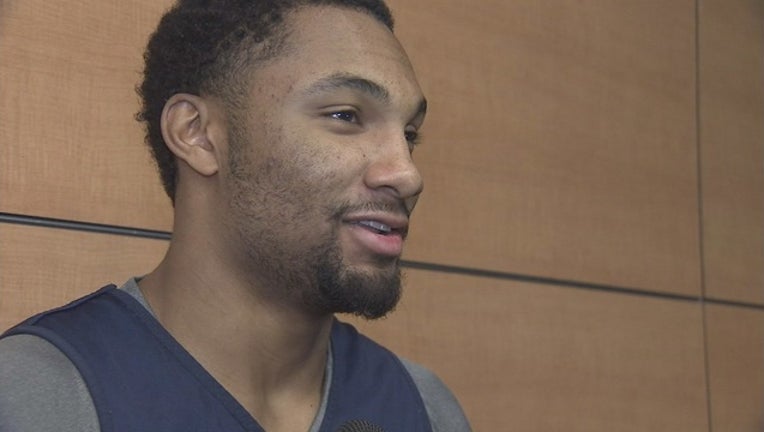 EVANSTON, Ill. (AP) - Moments like this were exactly what coach Chris Collins envisioned for Northwestern and just what he sold his players on when he was making his recruiting pitch.

A packed crowd roaring from the opening tip. A raucous celebration after a spectacular, buzzer-beating play. And another big step toward an NCAA Tournament for a program still trying to get there.

Dererk Pardon scored on a layup at the buzzer off a long inbound pass from Nathan Taphorn to give Northwestern a 67-65 victory over Michigan on Wednesday night.

The Wildcats (21-9, 10-7 Big Ten) set a program record for wins and moved closer to that ever-elusive tournament bid thanks to one spectacular finish.

The ball got knocked out of bounds after the Wolverines' Zak Irvin missed a 3-pointer in the closing seconds, and what transpired from there was nothing short of wild.

Both teams called timeouts. Collins decided to go for the win rather than head to overtime, and with 1.7 seconds left, Taphorn unleashed a pass that might have caught the eyes of some NFL general managers.

The 6-foot-8 Pardon - with guard Derrick Walton Jr. on him after a switch - hauled it in with both hands on the right block and put up the winner with his left just in time. He then got mobbed and dragged to the court by teammates, and delirious fans poured out of the stands.

"That was a play I'll always remember," said Taphorn, a senior.

"I saw the ball, I thought it was long," Pardon said. "As I caught it, I'm like the rim is right there."

Michigan coach John Beilein thought the 6-1 Walton did all he could to break up the pass.

"He's a pretty good jumper," Beilein said. "You do everything you can, but it was perfect, a perfect throw."

The win was just what Northwestern - the school the school that hosted the first Final Four - needed. The Wildcats had dropped five of seven and maybe were feeling some pressure, something their coach urged them to embrace after losing to Indiana on Saturday.

"I came in and I challenged them and I told them there was pressure for the first time," said Collins, in his fourth year. "I said, 'Guys, there is pressure.' Anything good in life involves handling pressure - and succeeding under pressure."

Vic Law scored 18 for Northwestern. Bryant McIntosh added 13 points and five assists, and the Wildcats matched their highest conference win total since the 1932-33 team tied for the Big Ten championship.

Walton shook off a slow start to score 15 for Michigan (19-11, 9-8). He hit 4 of 8 3-pointers. Muhammad-Ali Abdur-Rahkman finished with 13 points. Irvin scored 12 and Moritz Wagner grabbed 10 rebounds. But the Wolverines took the loss after winning five of six.

Walton had just been called for a lane violation as Wagner attempted the front end of a one-and-one when McIntosh whipped a pass to Sanjay Lumpkin to give Northwestern a 65-63 lead with 1:47 remaining.

Irvin tied it on a put-back with 1:28 remaining. Both teams missed some chances to take the lead, but Northwestern came out on top thanks to a perfect pass from Taphorn to Pardon on a play drawn up by assistant coach Brian James. It was a risky call because Michigan would have had a chance to win had the pass sailed long.

"The best moment ever at Welsh-Ryan Arena," Law said.

Michigan: Though the Wolverines had been coming on strong, their NCAA hopes might have taken a hit with this loss. "Anybody that saw that game tonight - those are two great teams," Beilein said. "Those teams should both be playing in the post-season. But that's up to them."

Northwestern: The Wildcats, who looked like a lock for the NCAA a few weeks ago, can breathe a little easier after a rough stretch.

Northwestern: Hosts No. 16 Purdue in the final game at Welsh-Ryan Arena until the 2018-19 season. The Wildcats will play next year at Allstate Arena in Rosemont while their facility undergoes a $110 million renovation.