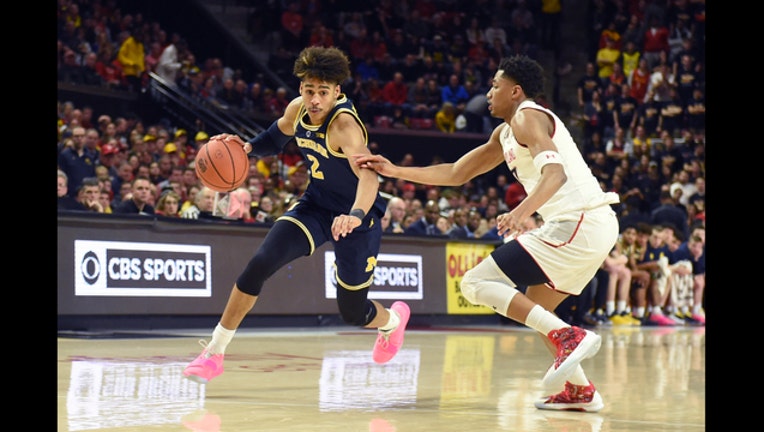 COLLEGE PARK, MD - MARCH 03: Jordan Poole #2 of the Michigan Wolverines dribbles by Aaron Wiggins #2 of the Maryland Terrapins in the first half during a college basketball game at the XFinity Center. (Photo by Mitchell Layton/Getty Images)

Gonzaga remained at No. 1 after extending the nation's longest winning streak to 20 games. Virginia stayed at No. 2 after winning both its games last week.

The rest of the AP Top 25 is a big jumble of teams trading places.

The Bulldogs received 42 of 64 votes in the men's college basketball poll released Monday after finishing an undefeated run through the West Coast Conference. The Cavaliers had 21 first-place votes and No. 4 Duke, which fell a spot, had the remaining one.

North Carolina and Tennessee both moved up two spots, to Nos. 3 and 5.

Every other team switched positions and No. 25 Central Florida moved into the poll for the first time since 2010-11.

Gonzaga (29-2) capped off a 16-0 run through the West Coast Conference by rolling over Pacific and Saint Mary's to earn the No. 1 seed in this week's WCC Tournament. The Zags set a conference record by winning by an average of 27 points and could be looking at the No. 1 overall seed in the NCAA Tournament with a seventh straight WCC Tournament title.

Gonzaga has done it despite forward Killian Tillie being limited to nine games this season due to injuries.

"They're a very good team, very good," Saint Mary's coach Randy Bennett said after losing to Gonzaga 69-55 on Saturday. "One of the best teams that I've coached against for sure. I can't remember one better unless it was Gonzaga two years ago. They are very good."

Virginia (26-2, 14-2 Atlantic Coast Conference) routed Georgia Tech, then blew out Pittsburgh to remain tied with North Carolina atop the ACC. The Cavaliers close out the regular season against Syracuse and Louisville this week before the ACC Tournament in Charlotte, North Carolina.

The Tar Heels inched up two spots after beating Syracuse and Clemson .

Duke was No. 1 two weeks ago but dropped after Zion Williamson blew out his shoe . The star freshman has missed the past three games since injuring his right knee when his left shoe gave out against rival North Carolina. Duke lost to the Tar Heels and then-No. 20 Virginia Tech before knocking off Miami on Saturday.

The Blue Devils fell one spot this week.

Tennessee was No. 1 in the AP poll and a No. 1 seed in the NCAA selection committee's initial rankings before losing to then-No. 5 Kentucky and No. 13 LSU. The Vols could be headed back to the No. 1 line after beating Ole Miss and blowing out Kentucky in a rematch last week.

Central Florida had been on the NCAA Tournament bubble needing a big victory to push over the top. The Knights got it on Saturday, handing No. 12 Houston its second loss of the season while ending the nation's longest home winning streak at 33 games.

Central Florida is ranked for the first time since the 2010-11 team reached No. 19 during a four-week stint in the AP Top 25.

The Cougars dropped four spots to No. 12 after reaching their highest ranking since the Phi Slama Jama team ended the 1983-84 season at No. 5.

No. 15 Virginia Tech had the biggest climb, moving up five places after knocking off Duke in its only game last week.

No. 16 Marquette had the biggest drop of the week, losing six places. Nevada fell five places to No. 17 after losing to Utah State.

Defending national champion Villanova joined UCF as the only teams entering the poll this week. The Wildcats were at No. 23 after beating Marquette . Villanova dropped out of the poll two weeks ago from No. 17 after three straight losses.

Washington dropped out from No. 25 after losing to California, which had previously been winless in the Pac-12.

Iowa went from No. 22 to not receiving a vote following losses to Ohio State and Rutgers.