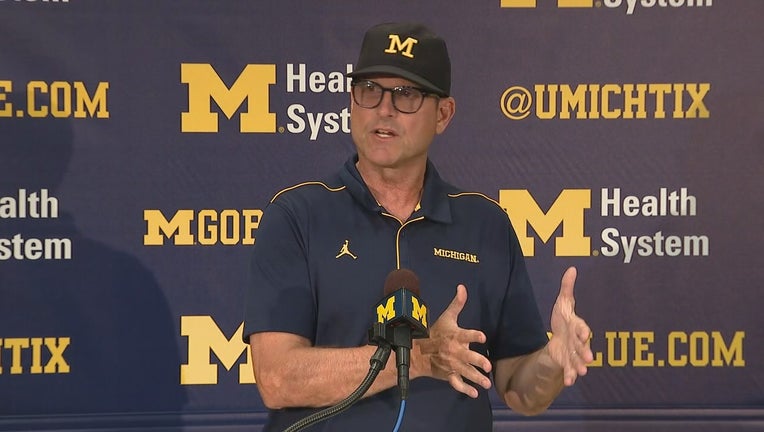 ALLEN PARK, Mich. - No. 19 Michigan seems to be relegated to playing just for pride this season.

The Wolverines (5-2, 3-2 Big Ten) were handed a second loss at Penn State, leaving them on the brink of being eliminated from the Big Ten race just past the halfway mark of the regular season.

Michigan went into the season hoping to end its 15-year conference championship drought, the longest in school history, and to perhaps contend for a national championship.

With five scheduled games left to play, those goals appear to be out of reach.

Captain Ben Bredeson, though, insisted there's plenty to play for this season.

The Wolverines will have a chance to earn a measure of respect, and perhaps improve their postseason positioning, if they can beat No. 8 Notre Dame (5-1) on Saturday night at the Big House.

"This isn't our last game of the year," defensive tackle Carlo Kemp said. "This isn't, 'All right. we're done. Let's start packing up and we'll get ready for next season.'

"We have top 10 matchups coming up. And, the big thing is we have one this Saturday and we have another opportunity on the national stage."

Michigan also has games remaining against Michigan State and No. 3 Ohio State next month at home.

"We've got three of the most important rivalries coming up," Kemp said. "We got Notre Dame, Michigan State and the game at the end of the year. Those are the games you play for, those are the teams you want to play."

Michigan was a play - and an extra point - away from pulling into a 28-all tie with the Nittany Lions on Saturday night late in the fourth quarter after falling behind by three touchdowns midway through the second quarter.

Shea Patterson found Ronnie Bell in the end zone on fourth down and the receiver, who has had a breakout season, and put a pass on his hands and he dropped the football.

Bell was in tears on the field, but that didn't get him sympathy from all fans.

A Michigan graduate, Connor Grady, sent Bell an email imploring him to quit the team and the sport.

Coach Jim Harbaugh defended Bell, saying he would take as many players like him as possible, and lashed out at the fan.

"I'm sure Connor Grady got drunk as heck Saturday night," Harbaugh said. "Probably talking to his friend, took to email and probably wrote a bunch of stuff that I'm sure the next day he was like, 'Why the heck did I do that. I'm an idiot.' I'm sure he felt pretty bad about it."

Given a chance to respond on Monday, Grady lamented what he wrote to Bell.

"I would like to state for the record that I wish to apologize to Mr. Bell and any other members of the Michigan community who were rightly offended by my thoughtless message to Mr. Bell," Grady wrote in an email to The Associated Press. "I have privately apologized to Mr. Bell, and I have also apologized publicly to the Bell family.

"I am a proud Michigan alumnus and a passionate fan who has supported the team for years. However, my conduct was not acceptable under any circumstances, and I make no excuses for my behavior. I am deeply sorry to have brought shame and embarrassment to the Michigan community, and I hope that the community can forgive me for such unbecoming behavior."