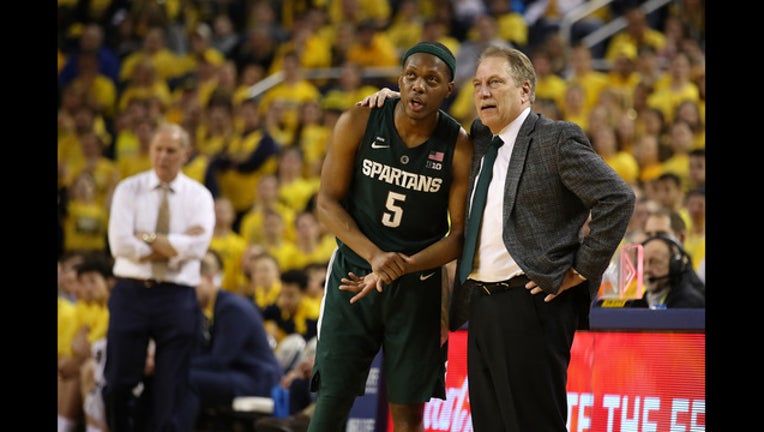 EAST LANSING, Mich. (AP) - Cassius Winston is a reflection of his parents and Michigan State is reaping the benefits.

The point guard plays and sounds like his soft-spoken father, Reg. The junior controls the tempo, speeding it up at times and taking it slow at others, while not saying much to anyone.

"I definitely got that from my dad," Winston said. "Cool, calm and collected."

He is driven for success like his mother, Wendi. He aims for accomplishments on annual lists - including being an All-America player and making it to the Final Four this year - and his mother holds him accountable.

"She has always made me write down my goals and chase them," Winston said.

Clearly, the combination of traits is working.

Winston has developed into a player of the year candidate, leading the sixth-ranked Spartans (23-5, 14-3 Big Ten) as they contend for a Big Ten title and perhaps top seeding in the NCAA Tournament while two of their top players are injured. They are tied with No. 14 Purdue for first place entering their game at Indiana (14-14, 5-12) on Saturday.

Winston is the only Division I player, as of Wednesday, averaging at least 19 points and seven assists while connecting on 40-plus percent of 3-point attempts. And, he's coming off perhaps his best performance. He scored 27 points and had eight assists to lead Michigan State to a 77-70 win over rival Michigan on the road.

"We've had a lot of point guards come into this building," Wolverines coach John Beilein said. "I've coached some great ones. That was as good a performance as you're going to see."

Winston was named the Big Ten player of the week after averaging 27.5 points, eight assists and 3.5 rebounds while making half of his 3-point shots in wins over then-No. 7 Michigan and Rutgers. He has joined three players in conference history to earn the honor at least five times in a season, putting him in an elite class with Purdue's Glenn Robinson and Caleb Swanigan along with Ohio State's Evan Turner.

"I never thought he could become what he is becoming," Michigan State coach Tom Izzo said. "And, I still think he still has a big ceiling of where he can get. He has changed his body a lot."

The 6-foot-1, 185-pound Detroiter has reshaped his physique, making more mature decisions than he used to for snacks and meals.

"His pregame meal used to be Starburst and Hot Cheetos," his mother recalled.

After laughing, her son said that is partly true.

"I high school, I used to eat a pack of Starburst before every game," Winston said sheepishly. "Looking back, it was probably not the best idea. I didn't eat Hot Cheetos before every game, but I loved them and ate them a lot.

"I made a big transformation when I got here."

He has substituted pasta and salad for his pregame meal these days, helping him properly fuel up to play all 40 minutes of a game, as he did against the Wolverines.

Winston has never been the tallest, quickest or most athletic player on the court and yet that hasn't stymied him. He won Michigan's Mr. Basketball award in 2016 and led the University of Detroit Jesuit High School to a state championship. He has become a college star after being a role player in his first two seasons in college when former teammate and Charlotte Hornets rookie Miles Bridges led the way.

"He isn't tall and doesn't jump out of the gym, so he has had to learn angles, tricks of the trade and to be crafty," Reg Winston said. "He's learned how to score with finger rolls, shots high off the glass and floaters. You don't have to be faster than everyone. You have to play at your own pace. It's sort of a blessing."

The Spartans were thankful he could do more than just make 3-point shots against the Wolverines because he didn't make one shot beyond the arc. He was 7 of 13, making an assortment of shots mostly in and around the lane, 0 of 3 on 3-pointers and 13 of 14 at the line while playing every minute against a defense stacked to stop him.

The performance may have pushed him one step closer to one of his goals, winning Big Ten player of the year honors.

It was one of the accomplishments he cited in a group text with his mother and father before the season stated.

"He was required by a teacher in high school to write down the things he wanted to accomplish," Wendi Winston recalled. "That's what kind of started it and he has adopted that."

His mother, alas, has something to do with that.

"Cassius is a kid who has always made a list of the things that he wants to accomplish and I've taken it upon myself to make sure we're working toward the lists," she said. "You can have a great and that's awesome. But if our goal is to be player of the year, then we're going to celebrate for a minute then get back to work. I feel like our work is never done."