DETROIT (FOX 2) - Miguel Cabrera has launched his 500th career home run on Sunday against the Toronto Blue Jays, becoming the 28th person in MLB history to hit that many homers in a career.

Cabrera has been chasing 500 all year but they've been harder to come by this season as he had gone nine days from his 498th home run on Aug. 3 until his 499th on Wednesday, Aug. 11.

He's the 28th player in MLB history to hit 500 and the first Tiger to do so while wearing the historic Old English D. He's also the first from Venezeula to hit reach the mark.

Cabrera's 499th homer came Aug. 11 in Baltimore against Matt Harvey in the fifth inning to open the scoring. The Tigers ultimately won the game 5-2. 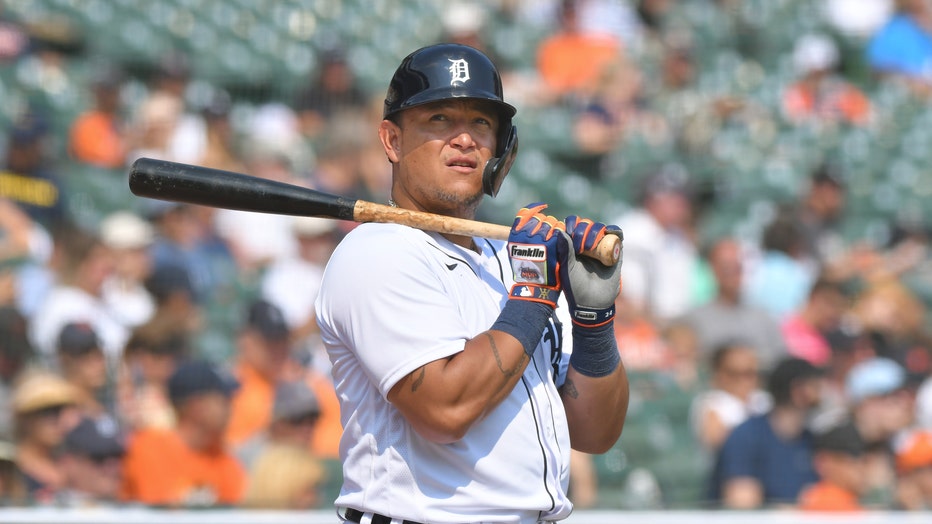 Miguel Cabrera of the Detroit Tigers looks on while waiting on-deck to bat during the game against the Boston Red Sox at Comerica Park on August 5, 2021 in Detroit, Michigan. (Photo by Mark Cunningham/MLB Photos via Getty Images)

It would have been understandable if Cabrera sat out that game, which starts at 4:05 p.m. on what is expected to be a steamy day in the Baltimore area. The Tigers are back home for six straight games after that.

Cabrera has hit 13 home runs on the season but that's not the only bit of history he's chasing. He's at 2,950 hits for his career and approaching the 3,000-hit mark.

If he is able to achieve both of those feats, that would put him in an even more elite company - joining Hank Aaron, Alex Rodriguez, Albert Pujols, Willie Mays, Rafael Palmeiro, and Eddie Murray as the only players in MLB history to have 3,000 hits and 500 home runs.

In Cabrera's illustrious career, he's achieved the remarkable feat of the triple crown in 2012 - leading the league in batting average (.330), home runs (44), and RBIs (139). Prior to Cabrera achieving the feat, it had been 45 years since a player had done so.

He's a guaranteed Hall of Famer whenever he decides to hang it up and after 13 years in Detroit and 18 years in the MLB overall. He's been to the all-star game 11 times, won the MVP in back-to-back seasons in 2012 and 2013, and is a 7-time Silver Slugger, the award given to the best offensive player at each position.