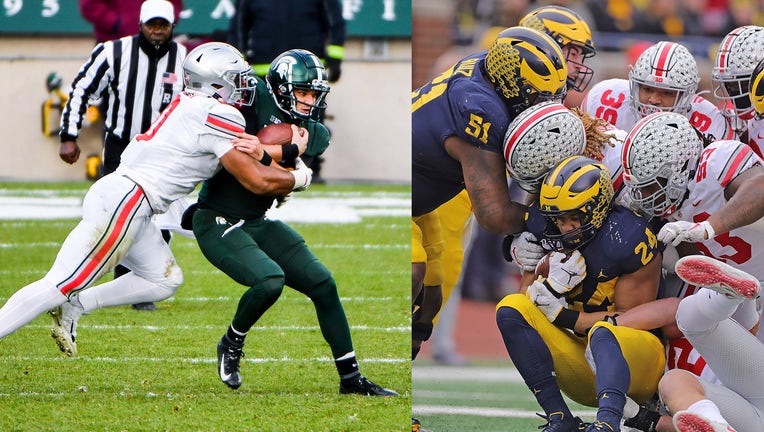 SOUTHFIELD, Mich. (FOX 2) - Since we’ve officially given Michigan State and Mel Tucker a free pass for 2020, let me start this week's recap with a story.

Last year, I was talking with an NFL/College Football analyst. We were talking about the incredible divide between Michigan and Ohio State when he said “it’s not complicated, it’s about talent.”

He went on to say that if you took the Buckeyes roster you’d probably have 40 to 45 players that would be in an NFL camp with a chance to make a roster. He estimated that Michigan maybe had half that. Michigan State was probably a step or two behind the Wolverines in that department. Thus, your gulf between the Buckeyes and the locals. You can argue about the numbers and whether they are exact but, I think you get the point and the overall thought process is hard to argue with.

We saw that on Saturday with Michigan State and Ohio State. The Spartans just aren’t ready to play at that level and it’s going to be a while. That’s not a shocking statement. We knew that was the case. We know it’s the case with Michigan. The question is whether either will get back to the point where they can compete regularly. Ohio State has stars - big time difference-makers.

Since 2016, Ohio State has had 9 players taken in the top 15 of the NFL Draft. UM and MSU have had 3 combined and 5 players taken overall in the first round. Again, that’s combined. Now, you can certainly be a good player in college and not necessarily a pro, but more often (way more) than not, the top programs are stocked with future NFL players.

You want to compete with those guys? Get better players. Comes down to expectations and what you want. I know UM and MSU and their fans want to beat Ohio State and compete with Alabama and Clemson, but it’s going to take drastic changes.

None of this is far removed from stating the obvious. Remember though, while we acknowledge that Ohio State is way better and perhaps even that it’s a pipe dream to think about reaching that level, it wasn’t that long ago that Michigan State was a factor in this series.

Between 2011 and 2016 they played 6 times and the average margin of victory in those games was 5 points. And MSU won twice, both times against Urban Meyer. They were legit wins, one of which came in the Big Ten Championship.

It didn’t feel like that HAD to be temporary. Things just slipped under Mark Dantonio.

Since then, by the way, Ohio State has won all four games by an average of 32 points.

We will see where it goes. MSU is embarking on a new era. They are hoping for better days than the one they endured Saturday. I’m not sure what Michigan is doing. I know what they aren’t doing and that’s being a factor in their rivalry with Ohio State. It used to feel like that was the object of the exercise. Now, that just feels like a long time ago.