McNamara threw for two touchdowns, Hassan Haskins ran for two, and the No. 8 Wolverines did their part to raise the stakes of next weekend’s showdown with Ohio State, routing Maryland 59-18 on Saturday.

Mike Sainristil made a one-handed catch in the end zone for a second-quarter TD, and Donovan Edwards had 10 catches for 170 yards and a touchdown. That all helped make this a relatively stress-free game for the Wolverines — a week before the big one.

"I think we're ready," McNamara said. "I mean, it's hard not to think about that team when you're so close, but I'm glad that we came out of this game with a win. We did what we had to do." 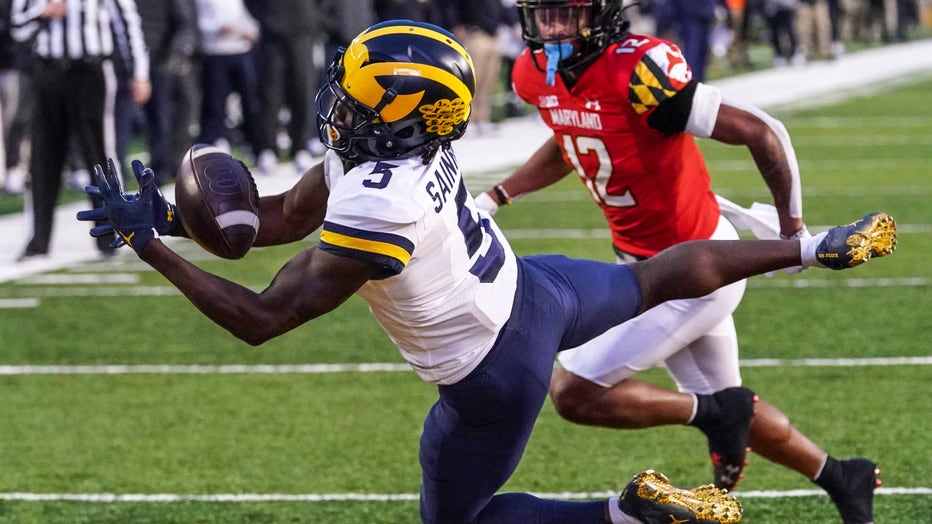 COLLEGE PARK, MD - NOVEMBER 20: Michigan Wolverines wide receiver Mike Sainristil (5) reaches back for the ball on a touchdown play in the second quarter during a Big 10 football game between the Michigan Wolverines and the Maryland Terrapins on Nove

"We want to win all the marbles," Wolverines coach Jim Harbaugh said. "We're in the position we want to be in. We've been preparing for this, really the entire year, and now bring that preparation to life this week — play for it all."

If the Wolverines were distracted by that looming matchup, it didn't affect their play much this weekend. Maryland (5-6, 2-6) didn't reach the end zone until Michigan was up 31-3 in the third quarter.

McNamara opened the scoring with a 2-yard touchdown pass to Luke Schoonmaker. Then Haskins made it 14-0 with a 1-yard scoring run later in the first quarter.

Haskins scored on another 1-yard run in the third, and when Maryland finally scored a touchdown on a 7-yard pass from Taulia Tagovailoa to Carlos Carriere, Michigan pulled off

"They do that cross-field kick once or twice a game," Harbaugh said. "Our plan was, the first time they did it, we'd activate the throwback."

Tagovailoa ran for a 17-yard touchdown, but Michigan answered with a 77-yard scoring strike from McNamara to Edwards. Then DJ Turner intercepted a pass and ran it back 42 yards for a TD to make it 52-18 — and give the Wolverines touchdowns on offense, defense and special teams in a span of 4:04.

McCarthy closed out the scoring with a 5-yard TD run in the fourth.

Michigan: So, here the Wolverines are again. They've won 10 games in a season when not much was expected of them, and now they'll try to break through against Ohio State. The Buckeyes hardly ever lose when they're on their game — and recently, they always seem to be on their game against Michigan.

Maryland: The Terps have had several chances to show they could match up with the top teams in the Big Ten, and they clearly weren't ready to do that. Maryland will now face Rutgers in its regular-season finale next weekend, with the winner becoming bowl eligible.

"I told our team we can’t hang our heads," Terps coach Michael Locksley said. "We have to flush this one pretty quickly because we still have a lot to play for next week going up to New Jersey with the opportunity to win six, which we haven’t done since 2016."

Tagovailoa broke Maryland's single-season record for completions. He had 19 on Saturday to bring his total to 287, one more than John Kaleo had in 1992.

"Great with the ball and a good teammate," Carriere said. "The biggest thing has been his leadership and the energy he brings to the whole team. He’s going to continue to grow and get better and the sky’s the limit. I’m excited to see what he’ll do in the future."

No. 7 Michigan State handed Michigan its lone loss this season, but now the Spartans have two defeats after losing to Ohio State

Maryland: At Rutgers on Saturday.