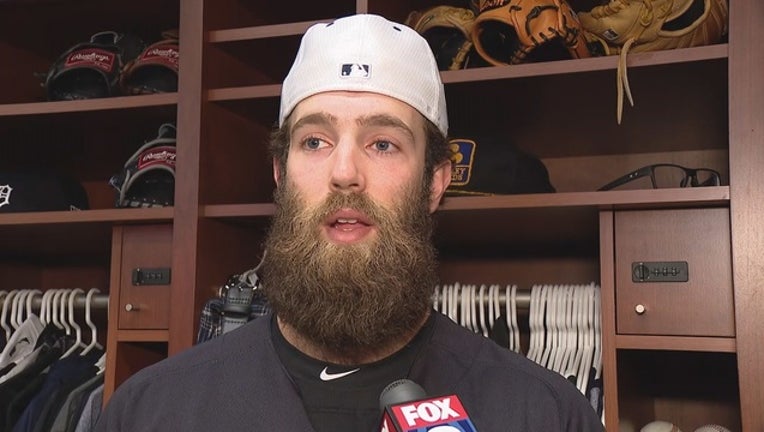 DETROIT (AP) - With closer Shane Greene making saves routine for the Detroit Tigers this year, pitcher Daniel Norris will try to do the same with wins.

He got the first one out of the way.

"I thought my fastball was the best it's been in a while," Norris said. "I felt like I could compete on every pitch instead of going too fast."

Norris (1-0) allowed two hits and walked one, earning his first victory since Sept. 28, 2017, and Gordon Beckham homered against his former team as the Tigers won two of three in the series.

Norris took Matt Moore's spot in the rotation after his season-ending knee surgery. Acquired from Toronto in a 2015 trade for David Price, Norris threw 79 pitches, 56 for strikes.

"He threw the ball great," Tigers manager Ron Gardenhire said. "You could see it in his face, he was confident. And now we've just got to keep that going forward."

Greene had a perfect ninth inning to earn his league-leading 10th save in 10 tries for the Tigers, closing all of their wins. His 10 saves are the most for a Tigers pitcher before the end of April in franchise history.

In his Tigers debut, first baseman Brandon Dixon had an RBI single in the second inning, scoring Jeimer Candelario, who tripled.

Miguel Cabrera brought home a hustling Nick Castellanos with a fourth-inning single as the Tigers base-runner scored after Eloy Jimenez's throw was a little off the mark from left field.

"I thought he attacked the ball pretty well," White Sox manager Rick Renteria said on the throw. "I think the throw should have been lower obviously and maybe we might have been able to redirect."

Castellanos reached on an error by center fielder Leury Garcia to lead off the sixth inning and scored on a Niko Goodrum double.

Tigers reliever Buck Farmer retired all four batters he faced, including three on strikeouts, but the White Sox had a two-out, three-run rally off Blaine Hardy and Victor Alcantara in the eighth. Ryan Cordell, Yolmer Sanchez, Leury Garcia and Tim Anderson all singled to pull within 4-3.

"If you keep your confidence and you keep working hard, you know that sooner or later you're going to get the results," Lopez said of his second straight quality start after three rough ones to open the season.

Dixon and John Hicks had two hits apiece for the Tigers.

Chasing a foul ball from his position at first base, Dixon went into the netting along the wall. He also ran into an out after getting his RBI single on his first Detroit at-bat, then threw wild to second base after Norris may have had Anderson picked off first in the fourth inning.

His RBI single had an exit velocity of 49.9 mph.

"I don't know if you call that a knock," Gardenhire said, when asked about the hit. "He was screaming alright, screaming from the pain. off the handle, wherever you want to call it. But it's a base hit."

Renteria and Anderson were back with the team after both watched Friday night's win from a Detroit hotel.

Both were suspended for their actions during a bench-clearing incident Wednesday against Kansas City.

Anderson had a hit and two stolen bases for a league-leading nine this season. His .418 batting average also leads the majors.

White Sox: RHP Lucas Giolito said he hopes to miss only one start after hurting his hamstring on Wednesday in Kansas City.