DETROIT - Evgeni Malkin is picking up the slack with Sidney Crosby out, making dazzling plays on offense and getting back on defense.

Malkin and Jake Guentzel each had a goal and two assists to help the Pittsburgh Penguins build a two-goal lead midway through the second period en route to a 5-3 win over the Detroit Red Wings on Saturday night.

The 33-year-old Malkin scored on a whirling shot that got past Jonathan Bernier midway through the second period, restoring a two-score lead with his eighth goal of the season and 399th of his career.

“I'm thrilled with Geno's game right now," coach Mike Sullivan said. “He’s having success at both ends of the rink.” 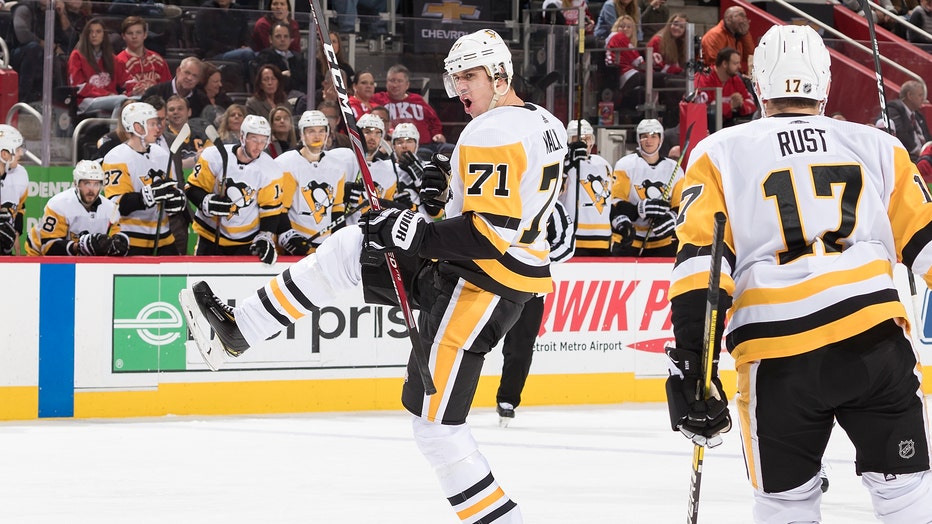 DETROIT, MI - DECEMBER 07: Evgeni Malkin #71 of the Pittsburgh Penguins celebrates his second period goal with teammate Bryan Rust #17 during an NHL game against the Detroit Red Wings at Little Caesars Arena on December 7, 2019 in Detroit, Michigan.

Crosby missed his 13th game in a row, recovering from last month's surgery to repair a core muscle.

The Penguins have made up for the loss of the superstar by having an NHL-high 24 players score at least one goal this season.

“It has helped us grab the points that we've grabbed over the last few weeks through some of the injuries that we've endured," Sullivan said. “We have some pretty good offensive players that aren't in the lineup right now.""

Guentzel had his team-leading 16th goal early in the game, shortly after grimacing in pain on the bench. The winger appeared to score off his right skate, ending a sequence that started with teammate Bryan Rust laying on the ice in Detroit's end without his broken stick and pushing the puck up the ice with his glove.

Guentzel has been playing with Malkin instead of Crosby and is enjoying every shift.

“He's playing at a high caliber right now and it just fun to be a part of it and go along for the ride," Guentzel said.

Matt Murray made 26 saves for his first win in nearly a month, helping Pittsburgh earn its third straight victory. He didn't help his case to compete with Tristan Jarry for playing time, giving up two goals in the third period.

Dylan Larkin cut Detroit's deficit to a goal with 3:04 left, slipping a wrist shot past Murray with a two-man advantage thanks to a power play and pulling its goaltender. The Red Wings were penalized for having too many men on the ice shortly thereafter and John Marino sealed the victory with an empty-net goal.

The rebuilding Red Wings have lost 11 in a row, their longest losing streak since dropping a franchise-record 14 consecutive games during the 1981-82 season.

“We got to be a little bit better in a lot of areas," coach Jeff Blashill acknowledged.

Chad Ruhwedel scored his first goal of the season, becoming the 24th player on the team with a goal, to put the Penguins up 2-0 late in the first.

Detroit's Robby Fabbri scored on a rebound early in the second, ending Pittsburgh's chance to shut out a third straight opponent.

Dominik Kahun slithered through Detroit's defense and scored early in the third, giving the Penguins a 4-1 lead.

Bernier was benched midway through the third period after making 19 saves. Eric Comrie, who was acquired from Arizona in a trade last month, entered the game in his Red Wings debut and stopped all four shots he faced.

Detroit's Filip Hronek scored with seven minutes left and Larkin scored to pull the struggling team within a goal before its comeback hopes were hurt by a penalty.

“It's a boost to our confidence that we could score and ultimately make this a tight game," Blashill said.

NOTES: Rust played in his second straight game after missing three in a row with a lower-body injury and said he didn't know what happened when he appeared to be hurt early in the game. I just ran into a guy," he said. “I'm not sure what happened." ... Detroit has tied its second longest losing streak, equaling an 11-game skid that ended the 1976-77 season. ... Jarry, who has outplayed Murray this season, had the shutouts in the two previous games against St. Louis and Arizona. ... Detroit had won four straight at home against Pittsburgh. ... Malkin entered the game with 26 points in 18 games against the Red Wings. ... Detroit's Tyler Bertuzzi was hurt just before the final goal was scored, laying out to block a shot with an empty net behind him and Blashill did not have an update on his condition.